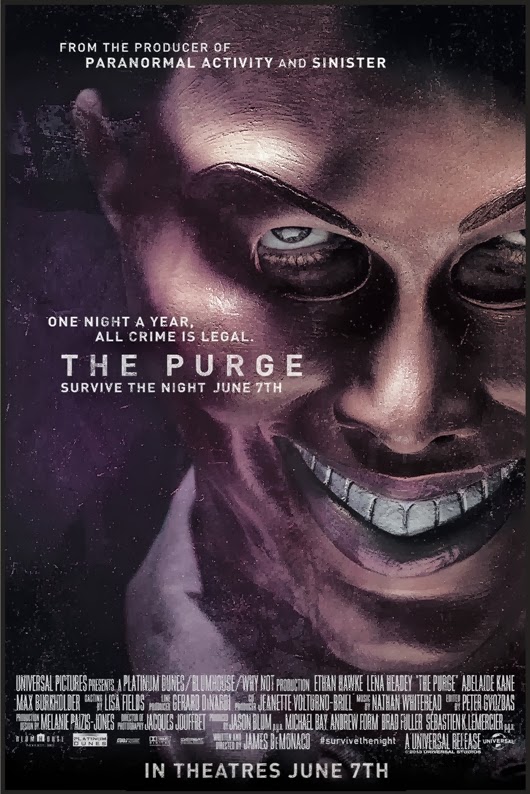 Or, How to Survive a Home Invasion on the One Night When Crime is Legal in 14 Easy Steps

Step 2a: Explain to your son why The Annual Purge is important, be sure to moralize and rationalize as much as possible.
Step 2b: Don't have a separate disarm code so your son can open the door for a stranger.

Step 3: Get distracted by a side-plot about your daughter's older boyfriend who wants to chat with you man-to-man about their relationship on the one night when he can kill you and get away with it.

Step 4: Resolve side-plot by killing the boyfriend. Search house for stranger. Catch him.

Step 5a: Waste time deciding whether to hand over the stranger to the mob outside your house.
Step 5b: Listen to some bullshit about how the homeless exist to be killed during The Annual Purge.

Step 6a: Incapacitate stranger, tie him to chair, then decide to fight rather than hand him over.
Step 6b: Do not untie stranger. Do not ask him about his army days. In fact, just forget about him altogether.

Step 7: When the mob breaks through your too-easily penetrable security doors, split up and roam the house. Be sure your son knows to keep his flashlight on and to wave it around a lot even though he's supposed to be hiding in the basement.

Step 8: Shoot bad guys. Don't pick up their guns, though.

Step 9a: Repeat step 5b.
Step 9b: Get stabbed by the head bad guy. Die. Your wife takes over the narrative, as do your neighbours who kill the remaining bad guys.

Step 10: Get tied up by neighbours and listen as they explain how they're going to kill you and your children because they're jealous of your late husband's success.

Step 12: Get rescued by the stranger you forgot all about in Step 6b.

Step 13: Force everyone to sit out the rest of the night in quiet civility. You're trying to be the better person, but your neighbours are too resentful to understand your message.

Step 14: Send everyone home in the morning in a wholly unfulfilling and dissatisfying ending to a movie that could have been a mildly interesting film about a post-occupy America in which the underclass has been pacified but instead turned out to be a paint-by-numbers home invasion with some bad social commentary crammed in.
Posted by DM at 09:51