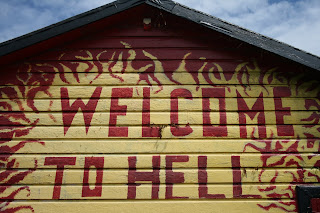 I recently returned from a trip to the Cayman Islands, where I spent a good deal of time underwater.  When I wasn't breathing compressed air through a plastic mouthpiece, I was alternately sunning myself/reading the shit novel my friend bought me at an airport bookstore.

We rented a car on our last day on Grand Cayman, and toured the island.  One must-see attraction was Hell.  Hell is named for an acre-large geologic formation on the island's west end.  There, black limestone pokes out of the ground; pointy, craggy rocks reaching toward the sky.  There's no clear history on why the place is called Hell, but one story tells us that a local official was heard to say, "This must be what Hell looks like." 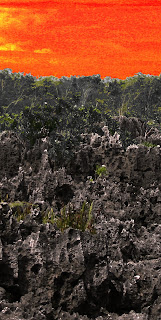 I have in no way altered this photo. I didn't paint over the clear blue sky or desaturate the trees.
Hell, Grand Cayman is one of a handful of places named such.  It might surprise no one to learn there are two Hells in the US, and, oddly, one in Norway.

Norway's Hell was not named for the mythic place, although it does exist within Norwegian theology, spelled Hel.  Rather, the Norwegian Hell (insert necessary "cold" joke here), comes from the word hellir, which means overhang or cliff cave.

Hell, California, was a short-lived town the middle of nowhere. Founded in 1954, the town at one time boasted a gas station and a bar.  Now, from what I understand, it's just a sandy patch in the desert off I-10.

Hell, Michigan, unlike it's California cousin, still exists today.  Officially named Hell in 1841, the place is a major kitsch distribution centre.  Interestingly, Hell, MI, might get its name from the German hell, meaning bright.  Story goes that a German couple descended from their stagecoach into the bright summer day and exclaimed "So schon hell!"  The locals overheard their remark and, for reasons that are lost to us but might have something to do with misinterpretation, named the place Hell.  Another, much more dismissive story suggests the town was so named as a gentle "fuck you" to town founder George Reeves who said, "You can name it Hell for all I care."

If you ever happen to be on Grand Cayman, in southern Norway, or in Livingston County, MI, I'd suggest taking a detour through Hell.  Although there wasn't much to Hell, C.I. other than some cool looking rocks and a dude named Ivan dressed as a devil, it was worth it just to say I'd been to Hell and back. 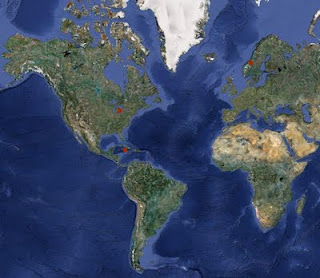