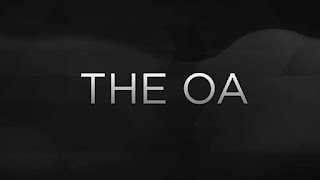 So I'm watching The OA and it occurs to me (more than once) that I've seen something kind of like it before. After I watched the last episode I googled "movies about cults" and I wasn't at all surprised to learn the same two people who created The OA also made The Sound of My Voice in 2011.

The Sound of My Voice--the film that I kept thinking about while watching The OA--is about a woman who claims to be a time traveler, but is really just a con artist. Or is she? In it, Brit Marling plays Maggie, a cult leader who says she's from the future. Two documentarians manage infiltrate Maggie's cult but as they spend more time listening to Maggie, one of them becomes increasingly convinced she's the real deal.

In The OA, Marling is Praire, aka OA, a woman who disappeared seven years ago. Now back with her family, Prairie steals away at night to meet in secret with a small group people to whom she tells the fantastical tale of her captivity. Prairie spins a yarn about medical experimentation with near death experiences and angels, and convinces her listeners that she holds the key to transcending death.

From what I gather, people liked The OA, except for the end and in truth, the series doesn't end well. But I think that's more a factor of the series not being well paced to begin with. The OA's a bit of a slog; it starts slowly, the story isn't developed evenly over all eight episodes and when the end comes, it brings with it more questions than answers. The Sound of My Voice has similar problems, specifically with how it ends. Toward the end of the film, a question is posed to one of the documentarians but we never get to hear the answer. I believe it's because the filmmakers themselves don't know what Maggie does with the kid. Similarly, I'm not sure if Brit Marling and Zal Batmanglij know exactly what happened to Prairie when she was held captive.

I'm inclined to believe her whole story was bullshit but maybe that's because I'm familiar with The Sound of My Voice, which her whole story really is bullshit. That doesn't mean the story itself isn't any less compelling, but it does mean the story requires some kind of context or backdrop to make it meaningful for the audience. Were The OA better developed, if Prairie was able to change or enrich the lives of all her acolytes, and not just one or two, despite her having told them lies, then maybe the series finale wouldn't have been such a let down.

Rooted in scifi but bordering on fantasy, The OA leans too heavily on ambiguity in its final moments, undercutting its own premise. Also, I think it kind of forgets about or looses track of some of its story elements. But then again, because Prairie never gets to finish telling her story, the series can get away with loose ends. Personally, I find this kind of sloppy, a lazy writing trick to deal with an unresolved plot. Sure, I could think up my own reasons as to why everyone had to leave their doors wide open, but that's not what I signed on for.

If asked, I'll tell people I liked half the show. Prairie's story, even if it's all made up, is really interesting. It's a good story about one man's obsession with the hereafter. But it's unfinished and that lack of closure is dissatisfying.

Did you know that you can shorten your long urls with Shortest and earn cash for every visit to your short urls.