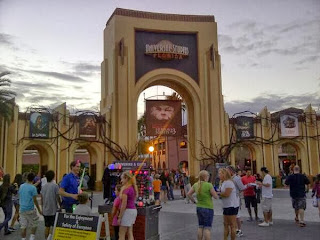 I missed HHN (Orlando) last year, but if there was ever a year to miss, that was it. One friend was so disappointed she thought she might not return this year.

But it was good! Eight houses again, up from last year's seven. No real scare zones, however. At least not like in years past. But the haunted houses were wonderful and I shrieked and screamed and laughed so much my voice was raw the next day.

I wasn't too well prepared for this year's visit. I knew there'd be Walking Dead stuff but that's about it. And I wasn't too jazzed about it, either. I don't like The Walking Dead and it sounded like Universal was rehashing last year's gimmick. But when I arrived at the park I was delighted to learn Cabin in the Woods and American Werewolf in London would be houses this year. 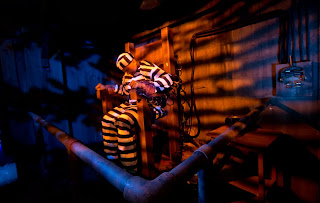 Resident Evil, The Walking Dead, and La Llorona were, in my opinion, weakest of the lot. Still loads of fun, of course, but others made more of an impression. I wasn't super looking forward to Evil Dead because I'm not a fan of the remake, but it highlighted the better parts of the movie and I liked it more than I thought.

When I there two years ago, there was a house called Havoc. The story was one of super soldiers and experiments gone wrong, and I remember really liking the house. Well, Havoc had a sequel this year--it's like they knew I was going to be there. This time round, the train transporting the super soldiers has derailed, and visitors walk through the carnage, narrowly avoiding encounters with the "dogs of war."

Every year Universal builds a concept house, a kind of experiment in haunted houses. And every year a house is set in Cary, Ohio. This year, the concept house and Ohio house were one and the same. Afterlife: Death's Vengeance takes you on a 3D journey through serial killer Bobby "The Blade"'s afterlife. It was a trippy ride and a lot of fun.

I was really looking forward to Cabin in the Woods, obviously. My friends and I discussed the possibility of seeing a merman. I was holding out for the fake Cenobite. We weren't disappointed. As good as Cabin was, it's second to An American Werewolf in London. The house wonderfully recreates memorably scenes from the movie and the werewolves are amazing and terrifying. When we walked out of there, all six of us were in agreement it was the best of the lot. 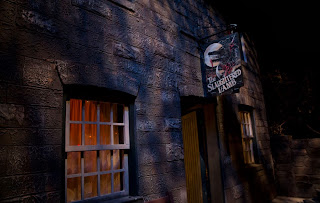 Although the houses were a good time, the fun and atmosphere enjoyed indoors did not carry out into the street. While scare zones appeared on the map, they existed only in spirit. Zombies roamed the park and sure they lunged at passersby and populated set pieces, but it was one note. Whereas in the past the scare zones were each very special and distinct, this time they were all The Walking Dead. In some cases, all there was to see was a bus or a tent. Quite a departure from the outstanding special effects Universal pulled out two years ago. The worst part is, I can't understand why they'd cheap out. Last year, park construction forced Universal to re-think the scare zones and it was a bit a disaster. But there's no reason why they couldn't try to reclaim some of that former glory this time round.

Complaints aside, HHN is still a premier Halloween event and if you happen to be in or around Orlando this Halloween season you should go. And buy the express pass. Because lines are for suckers.
Posted by DM at 23:50