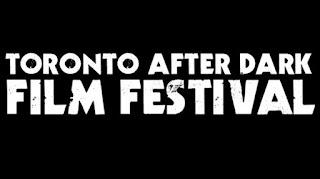 I was fully prepared to hate this movie. I didn't even really want to see it. The reason I stayed for the late show at Toronto After Dark's opening night double-feature--the film's Canadian premier--was so that I, too, could join the bandwagon of dislike that had been circling the movie since Fantastic Fest.

I sat in the theatre as the credits rolled. "I didn't hate it," I said to Mark, and then repeated on Twitter.

I'm always surprised when that happens, when a movie I'm sure to hate subverts or exceeds my expectations. Granted, my expectations are pretty low, but they're there nonetheless. American Mary, I'm pleased to say, caught be off guard.

Not having seen Dead Hooker in a Trunk, I have no basis for comparison--this is the first Soska twins movie I've seen. I'm glad I went in clean, so to speak. No chance of bias (except for my predetermined opinion). It's obvious from the first few moments that the girls have surrounded themselves with talented folk; American Mary looks great. A few sound issues aside, the film is well made with fantastic visual effects and Katharine Isabelle shines as the titular Mary.

She should. The part was written for her. 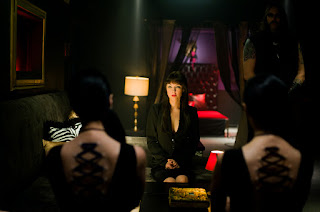 Mary Mason is a med student, about to start her surgical residency. She's also in debt. To make ends meet, she interviews for a job at a strip club but ends up operating in a very different role. Despite her initial resistance, Mary becomes involved in body modification and soon enjoys a new life free of debt and worry. But Mary's not out of the woods as events from her recent past come back to haunt her.

The film is more mature than I anticipated, and kind of understated. Although bodies are certainly on display, it's Mary's body that receives the most attention. Not really what you'd expect from a film that deals with body modification. The lovely Mary is objectified by one man and fantasized about by another, but there's nothing overtly sexual about Katharine Isabelle's performance. Mary is refreshingly unselfconscious about her looks, which is reflected in the way she dresses and carries herself; never does she use her sexuality to her advantage but she dresses provocatively enough in short skirts and platform heels. This all the more interesting given the sexual assault her character suffers early in the story.

I can't decide if Mary's singular sexual detachment is a factor of the film's female directors or the character's medical training. Maybe it's a bit of both. The film subverts or, perhaps more to the point, refutes the male gaze, replacing it with a relatively neutral one.

This neutrality distances the film somewhat from the audience. That distance makes it difficult to connect with Mary at times, but Mary herself feels disconnected from the world around her. Although she's welcome in the body mod community, she's not a member. But it's the closest thing she has to a circle of friends, and she even feels entitled reject others from the group.

As for the body mod community members, the film falls short of sensationalizing their modifications while still managing to shock the audience. It is a horror movie, after all. With the exception of one person, the movie is sensitive to the wants and needs of its characters, and uses humour to dispel their otherness. 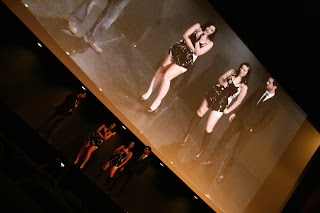 Strange that a film so well done should have as weak a script as it does. Maybe weak isn't the right word. Unfulfilled? Unconventional? The movie is not about Mary's personal journey--she wastes no time getting revenge or waffling about (this a good thing, by the way). She's very much the same person from beginning to end. Nor is the film about Mary's "situational journey"--she's not hounded or pursued in any way, or ever in any real danger. Rather, the film is just about Mary, her abrupt change in career path. It feels a little thin, is the problem. There are things happening in the background and all around her that could have been given more space in the script: the police investigation and Mary's relationship with Billy, for example.

Things just kind of happen in the story, and while it does have a trajectory, you never get a sense of where it's going. I suspect this is why some people dismiss it. The movie isn't artsy or weird enough for it just wander around a plot until time runs out; it's still meant to be a conventional narrative horror movie, but the conventional horror narrative is, unfortunately lacking.

During the post-screening Q&A, the twins told a funny story about trying to impress Eli Roth in which they admit to pulling the idea for American Mary out of their ass. Fortunately, the finished product is much more polished.

I have just installed iStripper, and now I enjoy having the sexiest virtual strippers on my desktop.


It's really a great and useful piece of info. I am glad that you just shared this helpful information with us. Please stay us up to date like this. Thank you for sharing. td ameritrade log on