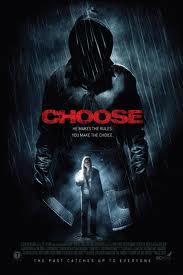 A few choice words about the ending of Choose.

I've already talked about audiences' distaste for teaser endings. It's a scientifically proven fact that people prefer closure over ambiguity. And yet filmmakers insist on leaving us hanging, either as a way to boost emotional reaction or to promote the possibility for a sequel. Choose is no different. The film ends on a "scary" note as the heroine is captured by a shady figure in a pickup truck.

My problem with this is not the film's blatant attempt at "one last scare" but rather the complete idiocy on display. This teaser is so stupid it verges on insulting and, perhaps even worse, it undermines the film as a whole. Likely the writers invested so little effort into this scene, they assumed the audience would spend even less time mulling over its ramifications. Normally, I would dismiss this kind of thing as simple pandering, but not this time.

After surviving her encounter with her (spoiler warning) half brother, a traumatized Fi stumbles from the motel room and wanders into the road. A truck pulls up alongside and without taking the time to look at or speak to the driver, Fi climbs into the cab. The driver turns out to be the same creepy dude who attacked her less than a week ago and he tells her, with utter sincerity, that she is just as pretty as her mom.

Fade Out
The End

Here's why this might be the dumbest teaser ending in the history of horror cinema: it comes right out of nowhere, and has nothing to do with anything that has happened in the film. Mr. Creepy is in exactly one other scene in the movie--a scene that could easily be excised from the film without damaging the integrity of the plot. In short, Mr. Creepy is a character of no consequence. To have him show up at the end of the movie suggests he is of greater importance to the story than he appears, but there is nothing in the film to back this up.

Mr. Creepy's presence at the end of the movie raises too many questions. Why was he at the motel to begin with? Is he stalking Fi? And who the fuck comes on to his dead lover's daughter? Sadly, I don't have any answers, and neither does the film. It's one thing to adopt horror tropes in order to pander to the audience, but Choose's mishandling of the most basic (and predictable) scare tactic suggests one of two things, either the filmmakers don't fully understand how "one last scare" is supposed to work, or Mr. Creepy's two brief appearances in the film were added after someone realized they'd mistakenly made a film with closure.

It doesn't matter which of these two scenarios is what really happened, both are symptomatic of a larger problem that plagues contemporary horror: a paint-by-numbers approach to horror filmmaking that supplants actual storytelling for routine plot.