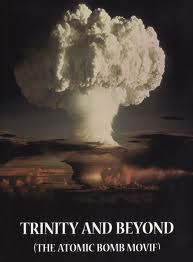 Why, you may ask yourself, is she reviewing a documentary that's not even about genre film?

Well, I would patiently explain, it is about explosions.  Very large explosions.

Trinity and Beyond, subtitled The Atomic Bomb Movie, is just that.  Declassified atomic test footage.  Narrated by William Shatner, the film recounts how America entered the atomic age, from Einstein's letter to Roosevelt in 1939 to the limited test ban in 1963.  In the intervening years, the US performed 331 atmospheric tests of A- and H-bombs, and the movie is largely footage of these bombs going off.

I once heard this story, I don't know where, about the Soviets' own atomic tests.  I heard how they kept building bigger and bigger bombs until they detonated one so huge it scared them and they stopped.  I don't know how much of that is true, but the "Russ" did build and set off the largest atmospheric bomb in the world, a 50 megaton monster, in 1961.


I love a good explosion in a movie.  They're amazing when done right.  The explosions in Trinity are awesome in a way that no Hollywood blockbuster can ever hope to achieve, and not because they're so much bigger, and so very real.  I think it's because their frightening power is tempered with an odd beauty.  Which just makes them all the more dangerous.  When the bombs go off, and the light finally fades, the clouds form.  And some of them are quite beautiful.
I never gave much thought to war.  It isn't a part of my life, thank god.  Bombs and wars were something I learned about in school, a chapter in a history book, like Louis Real or Babylon.  But I did manage, over the years, to cultivate an appropriate fear of nuclear war.  And then I went to Washington.

Touring the Air and Space Museum, I came upon the missile and bomb display (it's hard to miss).  Standing in the shadow of those weapons I felt, for the first time, truly afraid.  I was terrified by their destructive power--something which I can only just begin to comprehend.  The missiles were so much bigger than me, so much bigger, I thought, than all of us.

Interspersed throughout the 'splosions in Trinity, are interviews with Drs Edward Teller and Frank Shelton.  Dr Teller, at one point, speaks about how is involvement with the Manhattan project changed his outlook.  Teller had never intended to be the "father of the hydrogen bomb" but after witnessing the results of early atomic testing, he wanted to keep pushing the limits, to see how far science could go.

It was this sentiment, I think, what gave me pause at the museum.  Its small collection of arms are just waypoints on the path to assured mutual destruction.  War will take us only so far, curiosity will push into the limitless beyond.  And that's really, very scary. 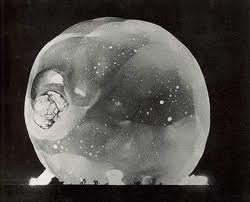 The desert sands melt into glass and sparkle in the bomb's furious light.
Posted by DM at 13:25