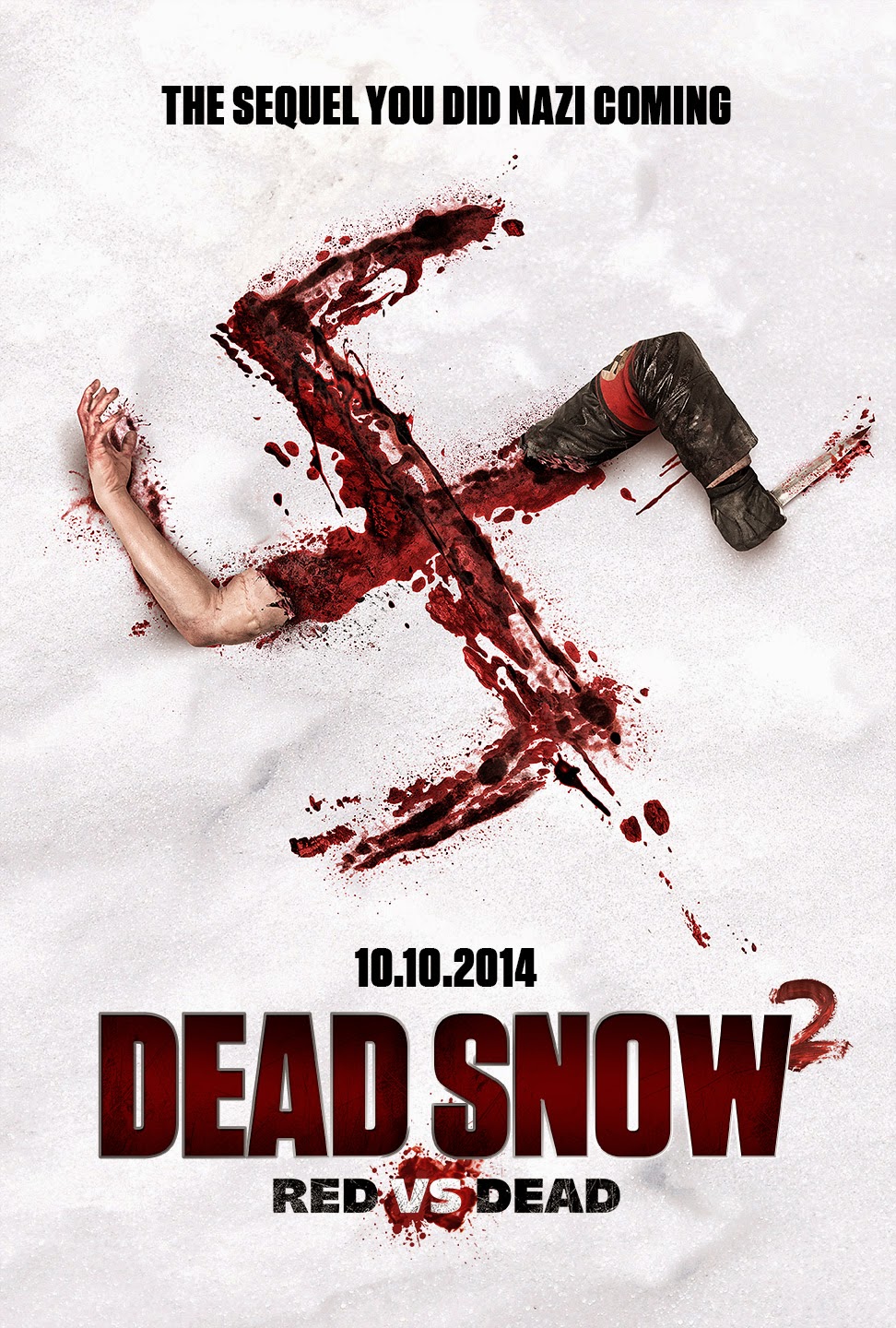 Picking up shortly (one might say immediately) after the events of Dead Snow, Martin finds himself a hunted man. He's wanted by the police for the murders of everyone who died in the first movie as well as a few other people who get offed at the start of the sequel. He's also wanted by the Zombie Squad, a trio of nerds from the US who've taken an interest in his case. The only folks who're fine with just letting him go are the zombies, but that's because they have more important business to take care of.

When the Zombie Squad arrives in Norway and hooks up with Martin, they set about trying to defeat the platoon of Nazi zombies that are marching across the country. In order to do so, they quickly realize they need an army of their own, and through some clever borrowing from other genres, Martin and his new friends reinvent the zombie movie.

If I was worried Dead Snow 2 would suffer the same weird tonal problems that plagued the first movie, I needn't have. The film never lets up being hilarious while still managing to take itself seriously enough for everyone to connect with the story. The gore is on par with the original, which is to say it's outrageous. I've never seen intestines used in such an interesting and creative way.

A message from the director, Tommy Wirkola, that played before the film warned the audience about the film's potential to offend. Talking with my friends afterwards, we agreed the movie pushed the limits a bit but all the violence was contextually appropriate. You would expect a rampaging hoard of undead Nazis to slaughter everyone in their path unconditionally; you'd be upset if they didn't.

Dead Snow 2 is painted in broad strokes. There's very little subtlety or nuance here but still the film manages to tug at your guts. Witness Martin's pet zombie who's repeatedly maimed—you can't help but feel sorry for him, he's so pathetic. Or Glenn, the poor schmuck who gets pulled into the mayhem. Even though the movie plays with your emotions, waffling between amused and appalled, it stops short of being overly sentimental. It also shies away from too much self-referential humour, with just one good meta-joke.

Dead Snow 2's carnage is nearly unrelenting. The film is wall-to-wall zombies, violence, and gore. And it never gets tired. Unlike other zombie attack/survival movies in which everything grinds to a halt when the zombies show up and the majority of the film is spent defending or running away from zombies, Dead Snow 2 keeps the story going by putting the humans on the offensive. Moreover, its zombies have a purpose which gives the film structure.

Everything comes to a head in the final confrontation, the ultimate zombie throwdown between the Nazis and Martin's army. There's nothing particularly unexpected about how the fight goes, but the scene is filled with inventive kills and some first-class ass-kicking. Not satisfied to just sit back and let the fight play out, the movie briefly cuts away to a zombie triage unit where we get to experience zombie battlefield medicine. This kind of care and attention to detail is present throughout the film and speaks to a genuine love for the genre.

Working in the US studio system takes its toll, and upon returning home to Norway Wirkola was looking to just relax with good zombie flick. As he explained in his address, Dead Snow 2 was meant to be fun. Fun for him and fun for all of us. And it is. So. Much. Fun.
Posted by DM at 16:39