My friend's house was robbed.  The thieves made off with nearly everything, including the crisper drawers.  Slowly she's replacing what was taken, though I think she's forsaken the fridge.  Before I left for my journey to the western Pacific, she and I were in the bookstore searching out new titles for her recently-pilfered library.

"What about this one?" I asked.  I held up a paperback.
"Uh, no."
"Come on, it sounds interesting."
"Hell's Aquarium? You read it," she said and grabbed a copy of Neverwhere at my suggestion.

Really, I picked it out as a kind of joke.  I knew she'd never go for a book about sea monsters and a giant killer shark.  I hadn't counted on the backfire, though.  I was traveling very near to where the action was set, the Philippine Sea.  I shared a laugh with the woman at the check-out--judging purely on looks and title the book appeared to be, by all accounts, terrible.

And now that I've read all off Hell's Aquarium I can say that it lived up to expectations.

Hell's Aquarium is just one installment in the Meg series, a collection of books about megalodons.  Even though I've never read a single entry in the Meg canon, it wasn't a problem diving right into the story.  Alten does a good job catching the reader up.  What is a problem is that Hell's Aquarium kind of reads like two books and the title could refer to either one of the two principal settings.

Story number one revolves around Angel, a megolodon housed at the Tanaka Institute in Monte Ray, California, and her pups.  The Institute was not built to hold five giant killer sharks and the staff are having problems dealing with animal rights activists who want to see the sharks set free.  Even when Angel starts eating people.  Even when her pups start eating each other.

Story number two follows David Taylor, son of Jonas Taylor who runs the Institute.  David is lured first to Dubai and then to the bottom of the ocean to capture sea monsters for the crown prince.  A secret sea, located beneath the Philippine Sea, is home to prehistoric monstrous fish and dinosaurs, and the UAE is looking to stock its new aquarium with the beasts.

Equally preposterous, the stories are bloody, violent, and engaging up to a point.  Alten's fondness for exclamation points detracts a bit from the narrative.  And his style is such that you feel like you're reading a novelization or, weirder still, a script in prose.  Also, given that we are in fact dealing with a book, there's no excuse for loose ends and unresolved conflicts (to be sure, there's never a good reason for that kind of writing) and yet characters come and go and people constantly say and do surprising things with no explanation.

I suppose it seems a little unfair of me to rag on a book I knew was going to be terrible.  So I'll say this instead: it kind of got to me.  I realize that makes me sound like even more of a sucker, but the truth is I was scuba diving with sharks in the Philippine Sea the day after finishing Hell's Aquarium.  The black-tipped reef sharks weren't any bigger than me, but still, when I faced them, there came a moment when I thought of what else might be in the water with me. 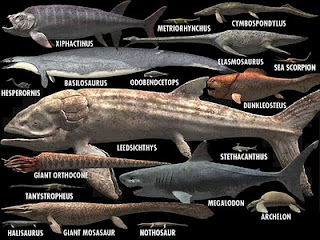 Steve Alten's books are great airport trash and I say that only in the nicest of terms, seeing how his books are somthing mindless to pick up and kill a few hours with on the comute or while on a long journey.
The film version of "Meg" is still trying to get made, after years of failed studio attempts, but in the meantime I guess we have the books, which I'm still trying to pick up, due to poor distribution here in the UK. I'd recommend reading the others though, if you enjoyed this one.

I can't decide if I'll keep reading. Part of me wants to and part of me tells me I have loads of other trash to read.

Finally someone else who's read these! Though I will say that the first in the series "Meg" doesn't suffer from the problems of his later books in the series. I found it to be genuinely creepy for the first half of the book. Though you actually dive so YMMV.

But yeah the Meg series is a great big bucket of "Waiting for my plane" popcorn. Along the same lines is James Byron Huggin's "Cain". If you haven't read it yet give it a shot. More rainy day reading, but fun.

Thanks for the Cain suggestion, J. I'm always looking for more trashy reads. Given what you and Elwood have said, I think I might give the first Meg book a try.

I seriously have no idea what you are talking about, trashy reads, I happen to find these books amazing, while there was a bit of Meg 4 that got just a tiny bit boring, the subject matter is awesome...the point is you are supposed to think...what if...and the story line about the Crown Prince of Dubai, inspired.

You want real trashy reads try the 50 Shades Trilogy, I found them craptacular at best.