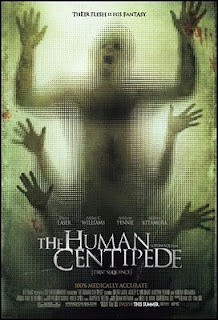 I thought the trailer gave too much away.  It made me uncomfortable, though, and that was something.  A feeling I couldn't shake for a couple of days, some kind of unnaturalness--different from being entirely grossed out, just wrong.  I was intrigued, in spite of myself.  And nervous, afraid the film would leave me feeling even more weird.

I have to admit, I didn't feel nearly as icky.  I think the trailer, in its reveal, had prepared me.  Still, the very idea of a human centipede is mind-blowingly disgusting.  And to have it explained in painstaking detail, and then to see the result in all its perverted glory, it's hard not to be both fascinated and alienated by the science and depravity of it all.

The centipede may be the centerpiece of the movie, but Dr. Heiter is easily the best thing about the film.  He's a human inhuman monster.  Not some detached, superior intellectual, but a feeling man who is truly and deeply touched by madness.  Once a great surgeon, he has retired to the country to pursue his medical experimentation in peace.  Unlike other monsters who wear a mask of benevolence, Dr. Heiter is has no interest in making people feel welcome or comfortable in his home.

To give the film credit, where credit's due, the movie does not take us into the operating room, but gives us time to reflect on the procedure.  Indeed, this down time tends to drag just a bit, but the delicacy with which the film handles the moment of sewing three people together, is surprising.  And it's balanced, or perhaps more appropriately, offset, by the remainder of the film being focused almost entirely on the experiences of the centipede.
Posted by DM at 11:07

Oh how I love monster type movies like this. I must see it. Sounds so creepy you just have to love the mad scientist....

I really did like Dieter Laser in this. I think the hype set a lot of people up for a different kind of movie, but I thought it was pretty damn good.

I am all for uncomfortable horror films, but I just cannot bring myself to watch this.

Hi Divemistress, I’m hosting the My Best Post blog-a-thon. It goes from May 21st-23rd.
Want to know the best part? You’ve already written your entry.
Just send me a link to your best/favorite/underrated blog post! Thanks!