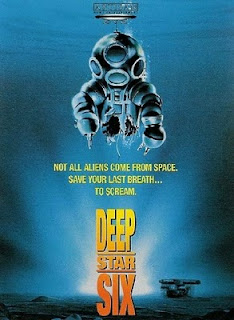 I had no idea Sean Cunningham directed this movie.  I suppose it was inevitable that he would journey from the lakeshore to the bottom of the ocean.  No?  Is that too much of a stretch?

The Deep Star is an underwater military installation manned by a handful of scientists who are busily trying to install a missile platform.  What was supposed to be a four month job has stretched to six, and everyone is feeling antsy.  They have until the end of the week to finish up or the whole project will be scrapped.  If we're being honest with ourselves, no one really cares, save for van Gelder and he starts bullying everyone stuck down there with him.  When a controlled blast causes part of the sea floor to collapse, the crew glimpses a new underwater environment, supposedly sealed off for thousands, maybe millions of years.  But the space isn't entirely devoid of life and the rumours that have persisted over the years, of something big and dangerous living in these waters, are suddenly and violently proven true.

Deep Star Six came out in 1989 and it's entirely possible I saw back then, because I remember as much about this movie as I do about the rest of 1989.  Which is to say I know that it happened.  Other films that premiered in 1989 include Leviathan and The Abyss, so it seems the end of the decade was a big year for terror-from-the-deep-type movies.  Why?  I don't know.  I looked and came up with nothing.  Seriously, nothing happened in '88 or '89 that might explain the influx of underwater horror.  Except for maybe word got out that Cameron was doing this "aliens of the deep" thing and so everyone else jumped on board.

And why not?  The bottom of the ocean is just as alien and unfamiliar as outer space.  More so, in fact.  I mean take a look at this: 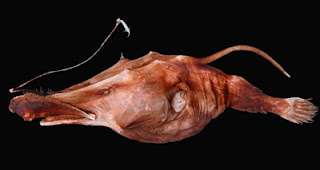 Neither evolution nor intelligent design can fully explain how this creature came into being and managed to survive, so I must naturally conclude it comes from beyond the moon and was dumped on our out-of-the-way planet to cover up some embarrassing experimentation.  And yet, the BBC would have me believe Mr. Wolf Trap Anglerfish up there, and similar monsters that lurk at the bottom of the ocean, are all of earthly origin.  Just holdovers from an earlier time.  Much like the unnamed monster in Deep Star Six.  Like it says on the poster, not all aliens come from space.

Like any good underwater horror movie, DSS drives home the point that we are fragile, terrestrial, earth-bound beings; the threat of drowning is ever-present, though never mentioned outright, and much fuss is made over the need to decompress before returning to the surface (take that, The Abyss!). The JIM suit is an especially nice touch, lending the movie a bit of credibility.  The unfortunate addition of an underwater bulldozer, however, sort of kills it, and all exterior shots hearken back to moon bases and space stations seen in earlier films.

Sort of a mix of underwater and outer space movie, Sean Cunningham's creature feature, whether it intends to or not, focuses heavily on the unnaturalness of human occupation in a habitat that is not meant for the species.  And the monster, when it appears, is so entirely alien it serves to further reinforce that we, in fact, know very little about our own planet.

Yet another of those films on the watch list I really have to check out. I guess 89 was like 98 was the year of giant asteroid movies, with both Deep impact and Armageddon being released or alternative 2000, when for some reason we became intrested in Mars, with a bunch of Mars based movies comming out.
Kind of shows how much original thought there is in the studio system.

Yes, Wolf Trap Anglerfish come from a different time. A time when aliens were using genetic engineering and biological warfare in an attempt to wipe out all life on earth. Also coming from this different time? Duck-billed platapi, trapdoor spiders, and, oddly, raccoons, who are up to something.

Up to something adorable!