I Have Poor Taste in Movies

In spite of the fact that 2009 is not yet over, and that frightening Jim Cary animated vehicle A Christmas Carol has yet to hit theatres, Rotten Tomatoes just released their list of 100 worst films of the decade. So I decided to check it out and knew immediately that his was going to go very badly for me. I've seen the first movie on their list. Then I checked out number one, and found, to my shame, that I've seen that one, too.

So here it is, proof that I have, uh, eclectic taste in film:

48 - BloodRayne
It was on TV. And I only sat through half of it.

47 - Soul Survivors
Seriously, it wasn't terrible. Predictable, but not terrible.

42 - House of the Dead
The only reason I didn't walk out was that we'd all gone to the movies in my car. I can't strand my friends in Kanata, can I? Can I?!?

31 - The Covenant
I think my roommate chose this one.

Is this a reason to hate The Covenant or to love it?
29 - Bless The Child
Uh, pass.

19 - Half Past Dead
Oh come on. It's a Steven Seagal movie, for chrissakes.

17 - Twisted
Actually, I'm not 100% sure I saw this. I get it confused with another movie that's just like it but the title of which I can never remember.

15 - Alone in the Dark
Omigod was this ever bad! Tara Reid as an archaeologist? Christian Slater as a whatever he was almost made up for it. Almost.

1 - Ballistic: Ecks vs Sever
This proves that I will watch anything with Antonio Banderas in it. That includes ads for Marks and Spencer. 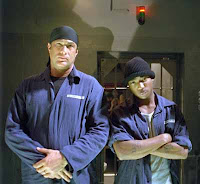