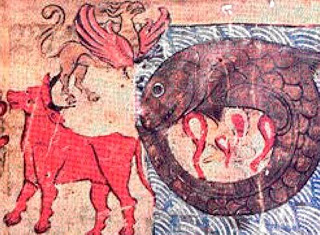 As the Bible teaches, God created a whole bunch of monsters. I'm not clear on why--I guess because He could. What's a bit more understandable is that the inclusion of monsters in the Jewish creation story was likely carried over from earlier cosmologies. The Bible doesn't go into great detail about all of the monsters God made, but a number of other sources do. Talmudic, midrashic, and Kabbalistic literature expound on these creatures, giving us a clearer picture of their purpose.

Instead of paraphrasing from this other blog, I'm just going to quote it:


The most extensive description of the Biblical Leviathan is in the book of Job. God, who proved to be quite the douche at the beginning of the book, delivers towards its end (starting around chapter 40) the most dickish monologue a deity could ever hope  to deliver. “Gee, Job. Did YOU create a world? No? What about the bottom of the sea? Ever been there? Not even that? Sucks to be you, Job. Sucks to be you.” (source)

Leviathan is a great big sea monster with sharp teeth, unbreakable skin, and eyes aflame. The waters around it boil shine, it reigns supreme over all the creatures of the sea, and carries the world between its fins. As mighty and terrible as Leviathan is, it's destined to become a meal for the righteous at the end times. First it will be hunted by Gabriel, then it will do battle with Behemoth, and once the two monsters kill each other, Leviathan will be eaten at the Messianic feast. Afterwards, everyone will get a piece of Leviathan skin, and the leftovers will be used as roofing materials for the new temple in the new world.

When God created Leviathan, He made two of them. But fearful of their offspring, God slew the female. He salted her so the meat will keep until the End of Days, because she, too, is on the menu.

Leviathan, in all its incarnations, is likely a holdover of earlier primordial combat myths about creator gods fighting monsters. In these stories, the monsters who are usually from the sea, represent chaos, and the creator gods have to vanquish these chaotic creatures in order to make the world. Lotan, who is slayed by Ba'al and his sister Anat, is one such chaotic force. Another creation myth is the Enuma Elish, in which Marduk battles Tiamat. Tiamat either lives in the sea or is a sea monster in addition to being a goddess. From her corpse, Marduk creates the sky and the earth.

Leviathan means "coil" so it's often depicted as a serpent. The Bible and the Talmud would have us believe when God created Leviathan, He was really making whales.

Behemoth is big. Really big. So big that it lies upon a thousand mountains, eats the grass of a thousand hills every day, and a special river flows into its mouth in order to quench its thirst. Unlike Leviathan, who rages in the sea, Behemoth doesn't do much of anything. It roars once a year, in the summer, to keep all the other animals in check.

Behemoth only exists to prove God's greatness. And to feed the righteous at the messianic banquet.

Behemoth is often thought to be the Great Ox, Shor Habar, which appears in the Talmud's end days dinner menu. At the end times, Behemoth (Shor Habar) and Leviathan will fight each other at a monster Kumite. There will be no winner, only dinner.

It's hard to find an predecessor to Behemoth in other, older, literatures. Not many religions venerated or celebrated a lazy herbivore, even if it was freaking enormous.

Ziz-Shadai is barely mentioned in the Bible, but it comes up a lot in extra-Biblical sources. The Ziz is a brother to Behemoth, a giant bird who has creation powers of its own. The Ziz is said to have its feet in the water and its head in the sky, and its wings fill the air. In other accounts, the Ziz rides on Leviathan's back and its wings hold up the sky.

The Ziz finds it's parallel in Anzu, a great big Mesopotamian bird-god-thing. In the epic of Lugalbanda and Enmerkar, Anzu lives at the top of a mountain range and herds wild bulls for its supper. In some stories, Anzu is neutral or even benevolent, but in others it's evil.  Anzu steals the tablets of destiny, giving it great power. Ninurta is sent to kill it, which he eventually does, restoring the cosmic order.

In Jewish folklore, the Ziz is the incarnation of fate. In one story, King Solomon heard a heavenly voice say his daughter would marry a peasant. The King didn't like the sound of that, so he locked his daughter in a tower. But then along came the Ziz, to pluck up the peasant and deliver him to the tower. In another tale, the Ziz picks up a student and drops him in the garden of a Spanish king. The king took a liking to the boy and let him live in the garden. There he met the princess and they fell in love. Then the Ziz carried the boy home, and it was only through a series of trials was the princess able to find her way to him.

Like Leviathan and Behemoth, Ziz will be consumed at the messianic banquet during the End of Days. That is unless the Ziz wasn't already eaten by Adam. In a passage from the midrash Rabba, Adam is said to have eaten the Ziz so that it would not create any new worlds.

I would love to see a midrash on Godzilla!