Eight Nights of Terror: The Dybbuk 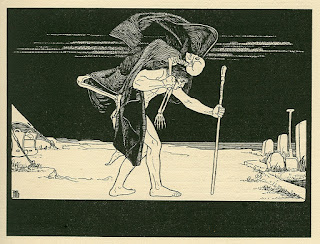 The dybbuk might be the most well-known Jewish supernatural entity outside of Judaism, second only to the golem. Dybbukim are not demons, as most people believe, but spirits. Specifically, a dybbuk is an evil spirit that attaches itself to a person and makes that person do bad things--like a possession.


The word "dybbuk" is a contraction or abbreviation of the phrase davuk me-ruaḥ ra'ah which means an adherence (or cleavage) of an evil spirit, and was used to describe someone who was possessed. A dybbuk is a ghost, the soul of a dead person who sinned so much in life that it cannot enter the afterlife. The soul, stuck on Earth, attaches itself to a living person, and forces the host to carry out its wishes. It is worth mentioning that this interpretation of the dybbuk came to prominence in the 16th century, and has been the reigning ? ever since.

Prior to the 1500s, dybbukim were believed to be demons who entered the bodies of the sick. Also, they weren't knows as dybbukim back then, but just evil spirits. These dybbukim are attested to in Talmudic and Kabbalistic literature, but few if any other sources exist. Later on, some dybbukim were thought to be the souls of people who hadn't been properly laid to rest, and had transformed into demons.

The dybbuk-as-demon disappeared in the 16th century as Jewish thought turned to notions of reincarnation. Possession, in this new paradigm, was a kind of transmigration, and so the possessing entity had to be soul barred from entering the afterlife as opposed to a demon. This change in the nature of the dybbuk also signaled a change in the nature of exorcism. Earlier, exorcisms expelled the demon or spirit, but in light of the new interpretation, exorcisms could purify the evil spirit.

Outside the Jewish religious and folkloric traditions, dybbukim weren't that well known. It wasn't until the early 20th century when the dybbuk entered the arts and popular culture. The first instance was a play titled The Dybbuk, by An-Ski (around 1916) which re-cast the dybbuk as tragic romantic figure. In the play, the dybbuk is the true love of the possessed and the two of them enter into a consensual union. 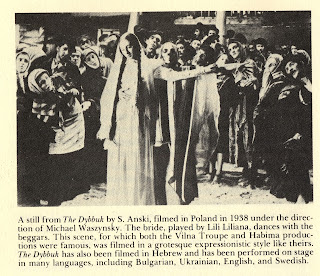 The dybbuk has also made its way into books and film. The Dybbuk Box, which was adapted for the screen and re-titled The Possession, presents a new twist to the old stories. In the book, which is nonfiction, the author buys a box on e-Bay that's believed to house a dybbuk. Everyone who owns the box, or is in possession of the box experiences strange and unsettling phenomena, and the author hides the box after sealing the dybbuk inside. In the movie, a young girl buys a box containing a Jewish demon. Both of these stories run counter to the common understanding of what a dybbuk is and what it does. That's not to say there's one true account of the dybbukim, but in these cases, common or populist haunting and possession narratives have taken control of the story.

This past September, Demon screened at TIFF. Based on the play Adherence, Demon tells the story of a man possessed by a dybbuk. In this case, the dybbuk is the spirit of a woman who wasn't properly laid to rest, harking back to older dybbuk traditions.
Posted by DM at 17:22