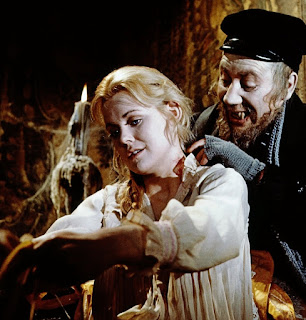 In this final post, I take a look at Jewish influences in genre cinema and television. Christianity reigns supreme in terms of how many horror stories are based on elements of Christian belief--I'm talking Satanic and apocalyptic stories--but every now and again Judaism inspires someone to go in a slightly different direction.

I didn't cover the golem in my rundown of Jewish "monsters," largely because it's the most well-known creature of Jewish myth. For that reason, the golem often appears in Jewish-inspired genre fictions. The X-Files, of course, has a golem episode (season 4, episode 15: Kaddish). The last name of the Jewish family who play a central role in this episode is Luria. It bears mentioning that Issac Luria, who was a 16th century Jewish mystic, features in a number of Jewish folktales in which the rebbe deals with the supernatural. The Luria family in the X-Files and their use of a golem suggest that someone at work on the show had at least a passing familiarity with Kabbalah.

Season 4 of Supernatural used Lilith as a the villain for its seasonal arc. The Lilith that appeared on the show had very little to do with the Lilith of the Bible, but it was a good season nonetheless. In season 7, Leviathan was the big bad. This Leviathan, however, wasn't a great big fish monster. Rather, it was consciousness that occupied human hosts and sometimes ate people. On a side note, I'm certain episode 9 of that season makes a Team America reference, so that's awesome.

Like The X-Files, Supernatural also has an episode that deals with a golem. This is a Jewish as it gets for the show in that the episode features Nazis, Nazi hunters, a rabbi, and a guy who's trying very hard to rid himself of his cultural and religious identity. Personally, I find the self-hating Jew thing a little insulting, but it's important for the character's personal journey.

Supernatural also makes use of the Lesser Key of Solomon, using a "demon trap" from the book to trap demons. Although not strictly a Jewish text, the Lesser Key has roots in Jewish history and myth.

The short-lived Constantine TV show also drew on Solomon's demonology. But whereas Supernatural uses the demon trap repeatedly, it only showed up in one episode of Constantine, and a variation at that. In the episode Feast of Friends, Constantine carves what looks like a Star of David (referred to as taba'at Shlomo, the Ring of Solomon ) onto a bottle, in the hopes of trapping a demon inside it. The taba'at Shlomo is mentioned in the Testament of Solomon--I can't speak to weather it appears in either of the Keys--and appears in the comic book.

Judaism plays a big role in Dig, which I've not yet finished watching, so I can't really comment on it. In short, both fundamentalist Christians and Jews are, in their own ways, trying to force the End of Days. Similarly, there's an episode in the third season of Millennium (which I didn't watch--I stopped after the second) in which a Jewish millennial cult abducts a pregnant woman in hopes that her child, if raised properly, will bring about the messianic age.

Obviously, there's The Possession, which is about a dybbuk. Then there's The Unborn, which is also about a dybbuk, but totally cocks up what a dybbuk is and does. It's not a terrible movie, but don't expect to learn anything about dybbuks by watching it. Perhaps the best of the contemporary dybbuk movies is Demon, which played at TIFF this past September.

Also rating an eleven in the obvious scale is The Dybbuk about a dybbuk, and Der Golem, about a golem. These films introduced generations of gentiles to dybbuks and golems, and are likely responsible, in one way or another, for their pervasiveness in popular culture.

Raiders of the Lost Ark, draws heavily on (made up) stories about the ark of the covenant, and mines Judaism for its premise. The titular ark is supposed to house the tablets on which the ten commandments are written, and anyone who opens the ark is in danger of having their face melted. I'm not sure if the inscribed words of God can actually do that, but who doesn't love to watch Nazis melt?

Another totally made up story, but still kinda rooted in the Bible, is the terrible Syfy (at the time, Sci-Fi) TV movie Monster Ark. This ark is a boat, a Noah's Ark v1.0, which contains what remains of the nephilim (a race of giants/monsters begat by women who slept with angels). The nephilim are attested to in the Bible, but there's no "monster ark."

The Fearless Vampire Killers isn't a movie that I'm at all familiar with, but it features a Jewish vampire. And a joke about using crosses to ward him off.

Rounding out this selection of Jewish-inspired horror movies are The Seventh Sign, and End of Days. The Seventh Sign, which is about an impending apocalypse, has little to do with Jewish eschatology, but it does make mention of the guf. The guf is the repository of souls, and there is a finite number of souls in the guf. In the film, Demi Moore is pregnant with the last soul, which means it's the end of the world.

End of Days has absolutely nothing to do with Jewish apocalyptism, but the movie's opening credits features this:

I really am overdue to listen to A Shoggoth on the Roof again.