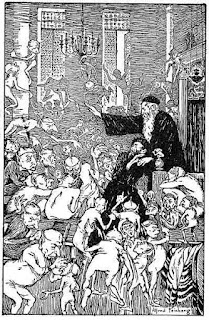 Demons abound in Jewish religion and folklore, but where do they come from? As we've already learned, they live in (or come from) the unfinished north corner of creation. But why would God create demons to begin with, if all they do is cause pain and suffering? Hardly seems like the work of a benevolent creator. Well, demons were supposed to be...other things. Not demons. God was still hard at work when the seventh day rolled around and his union-required cease-work kicked in, but there were still some spirits that didn't have any form. God knocked off, leaving those spirits unfinished, and they became demons. These demons begat more demons, through sexual relations with Adam. No surprise then that demons took a dislike to humanity, and made it their mission to toy with us.

As is the case with other elements of Judaism and Jewish belief, demons, too, owe their legacy to religions and cultures that pre-date Judaism. Mesopotamian belief systems were lousy with demons, some of whom were the physical manifestations of elements of human illness and suffering. There was a demon for headaches, a demon for fevers, and, as we've seen, a demon for miscarriages and SIDS (that would be Lamashtu/Lilith).

As monotheism slowly began to take shape, these demons, who were in the service of "evil" gods, or themselves, fell under the purview of God. Although not necessarily under God's command or control, He did make them, probably for a reason we can't hope to understand. Other elements related to a belief in demons worked their way into early Jewish religious practices. The High Priest's robes had bells on it, recalling the use of bells to keep demons at bay. The colour blue, which is big in Judaism, is supposed to ward off demons, as are written scripture texts and the smearing of doorposts, both of which might find their parallels in protective amulets, bowls, and the mezuzah.

In-groups and out-groups often have their own special words for things. The Isrealites referred to foreign gods as shedim, which is related to the Akkadian word for demon. Initially, the shedim weren't demons--just pagan gods--but in the Talmud and other texts, shedim is used to mean demon or devil. I should note there are different Talmuds, and the Babylonian Talmud has the most to say on the topic of demons. This likely due to the fact that Babylonian Jews lived among a people who strongly believed in many gods and demons, and their religion heavily influenced Jewish thought in Babylon.


The Babylonian Jews lived in a world which was filled with demons and spirits, malevolent and sometimes benevolent, who inhabited the air, the trees, water, roofs of houses, and privies. They are invisible; "If the eye could see them no one could endure them. They surround one on all

The Bible itself doesn't make mention of demons except in a few verses, none of which shed any light on the issue. Therefore, any serious study of Jewish demonology is rooted in extra-biblical literary materials. Confounding the issue somewhat are the terms used in earlier texts to describe demons or evil spirits. As noted, shedim took on new meaning over time. In addition to the shedim are the seirim, the mazzikim, and the ruhot. The seirim are demons who live in the desert (wilderness) and haunt ruins. Mazzikim and ruhot are more general terms for demons or evil spirits, but mazzikim could also refer to the spirits created on the sixth day.

In the latter half of the first millennium BCE, dualism in Judaism grew popular. Dualism is best understood as opposition, meaning good vs evil. As demons grew more powerful in certain parts of the Jewish diaspora, they were organized and allied together in a "fight" against Good, goodness, and truth. It's wrong to conceive of this dualism as some kind of war that will eventually end with one side victorious. Rather, the dualism is more representative of the "inexplicable" bad things that happen in the world and/or our own internal struggles and conflicts. 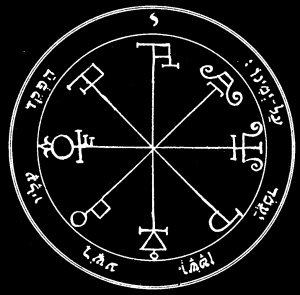 Demons are fairly indiscriminate with their victims--anyone and everyone could be a target. Kings, even. King Solomon in particular. As I've already discussed, Lilith, disguised as the Queen of Sheba attempted to trick Solomon into sleeping with her, but he saw right through her (or, saw through her dress to her ugly hairy legs). Solomon ruled over the united kingdom of Judah and Israel from 970-930 BCE. Solomon built the Temple, and is celebrated as wise ruler. In other circles, he's known for having been a keen demonologist.

The Testament of Solomon is a Greek work dating to around the late fifth-early sixth century CE, and  has been reproduced a number of times. The Testament, tells the story of how Solomon roped a bunch of demons into building the Temple by using a magical ring given to him by the angel Michael. Whenever Solomon subdues a demon, he forces it to tell him its name, what it does, how it can be defeated. In this way, Solomon is able to identify fifty-nine demons. The demons listed in the Testament are drawn from both Jewish and Christian beliefs, and the relatively simple banishment rituals are very much like those found in other Jewish magic texts, but the Testament itself is not a Jewish book.

Other demonology texts associated with or ascribed to King Solomon are the Greater and Lesser Keys of Solomon. The Greater Key of Solomon (or Key of Solomon) is a fourteenth or fifteenth century grimoire that describes how to prepare magical operations--what the book calls "experiments." The Key is divided into two books, the first teaches the reader how to summon ghosts and demons and make them do what you want, as well as some other magical operations. The second book describes what the operator (or "exorcist") has to do to prepare himself for the operation, what tools he needs, and what sacrifices should be made.

The Lesser Key of Solomon is another grimoire, this one dating to the mid-seventeenth century. Unlike the Greater Key, the Lesser Key lists seventy-two demons "caught" by Solomon, in addition to the names spirits and angels, as well as instructions on various magical operations. The Lesser Key, far from being an original manuscript, is a compilation of older material.

Like the Testament, the two Keys of Solomon aren't Jewish books, although there is a Hebrew version of the Greater Key. But all of these books attest to a strong belief in demons and magic and King Solomon's legacy for practical demonology.

Jewish demonology is deep and complex. Outside of the Kabbalistic literature on demons, there was little effort made to syncretize or give order to the vast, and sometimes contradictory, belief in demons. As such, this post has only scratched the surface.
Posted by DM at 17:04

Biblically demons are punks - thousands to possess one person and even then all they do is make that one person's life miserable. No damned ambition.

Searching for the Ultimate Dating Website? Join and find your perfect match.