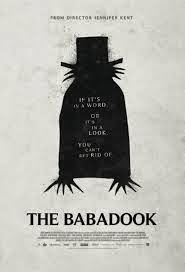 The Babadook has been making waves all over the place. So much so, that I feel the film has become a victim of over-hype. That's not to say The Babadook isn't any any good, but the glowing press creates expectations that can't ever be met. I even heard it said this was a top-notch possession film, which it isn't. A possession film, I mean. The Babadook is a psychological musing on grief.

Nearly seven years have passed since her husband's death, but time holds little meaning for Amelia. She lives day-to-day, nursing the raw, open wound left by Oskar's unexpected and violent passing. Her young son, Sam, reminds her too much of Oskar and Amelia has a difficult time loving her child. Into this unhappy home enters Mr. Babadook, a shadowy monster brought to life in a pop-up book. Sam insists the Babadook is real, which only angers Amelia, but even she can't explain or deny the strange voice she hears or the dread she feels at night.

The film is set mostly within the suffocating space of Amelia's house. As Sam is taken out of school, and Amelia looses her job, the movie turns inward cutting itself off from the rest of the world to focus on Sam and Amelia's growing psychosis. Journeys outside the home end badly for everyone and so the film takes on an enclosed feeling as Amelia becomes more withdrawn, shutting herself and her son inside their home.

The Babadook is a slow burn and, like Poltergeist, endings don't come easy. As a manifestation of her grief, the Babadook has power of Amelia, and she will be haunted by her husband's ghost until she can find it within herself to move on. More to the point, Amelia's tragic inability to let go is having a negative effect on Sam. If she can't get it together soon, she risks losing her son. But Amelia revels in her grief, identifies herself through her suffering, and letting go is scary for her. Scary like the Babadook.

The Babadook is more atmospheric than it is outright terrifying, although the film does reward the audience with a few glimpses of the monster. Most of the runtime is held over for exploring Amelia's and Sam's fractured psyches. Visual cues remind us of the ever-present threat of Mr. Babadook, while the look and feel of Amelia's home pays homage to the German Expressionism cinema of the early 20th century. There's no intensified continuity here, no fast-paced editing or shakycam. The Babadook trades on stable camerawork, some clever effects, and a brooding pace that leaves time to think and worry about what will happen next.

The film's warm reception and glowing reviews earned it a special place on the Toronto After Dark programme: the closing gala. Having sold out in record time, the festival added a second late-night screening to accommodate disappointed horror fans. Most sold-out shows have one or two empty seats, but The Babadook played to a full house, which included the grandparents of Noah Wiseman, the boy who plays Sam. I hope they're proud of him.

The Babadook's praise is well-deserved but audience members should be cautioned against falling victim to the hype. I hesitate to suggest part of that hype has to do with The Babadook being helmed by a first-time female director, but the fact of the matter is there are few women out there making horror movies and so we tend to give special attention to those who are.

I read about it http://onlineclassmentor.com/about_us I kind of liked the story, and they did not write bad reviews. but talk about the film is clearly intolerable