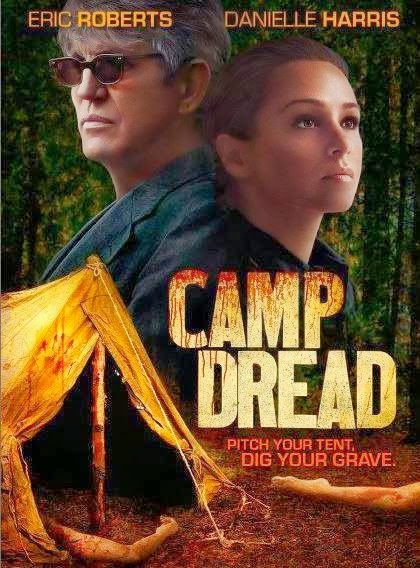 I regret to inform you that after having watched your movie, Camp Dread, I must request a refund for both my money and time spent. Anticipating your questions as to why I feel owed, and in order to prevent any further contact from you--ever--I have listed my reasons below.

Having read about, written about, and watched a lot of horror movies, I feel I am sufficiently qualified to pass judgement on yours. In short, it stinks. It plays as if you yourself have never a horror film but have only had one described to you in the broadest terms, perhaps something along the lines of "hot kids get killed at camp." You interpret the word "hot," to mean both physically attractive and sexually charged. This isn't a criticism, per se, but it does reflect a rather generic understanding of horror movie conventions. Worse is how you characterize the hot kids. I hesitate to describe them as either stereotypes or archetypes, given how thinly written they are. Suffice it to say, you mistake physical attributes and sexual orientation for personality. You've created a cast of characters who have little to no individuality (or humanity) and who serve no purpose other than to die.

Far be it for me to hope for a prize-winning filmic adventure, but I can't be blamed for wanting to connect to or identify with at least one character. Or to even be interested in the story at large.

I find your premise ludicrous, to say the least. Not only does it make no sense to send a group of delinquent youth to an unlicensed rehabilitation camp that doubles as a set for a reality television show--a show that will never air but only leveraged as a template for a future horror movie--you appear to have little to no familiarity with legal system. It is simply impossible for a girl who murdered her rapist brother to be sent to rehab camp to begin with, let alone the same camp as another girl whose only "crime" is homosexuality. Moreover, these "kids" as you describe them are in their twenties; they are adults and adults are not sentenced to rehab camps. At least, not in the way you suggest.

Leaving aside the larger issues of law and order, let us focus on the events that take place at your fictional Camp Rehab. Your characters are players in a survival reality show. They will undergo challenges that will force them to work together, presumably to help them better themselves, and win immunity from the "killer." The killer is an unknown individual who periodically eliminates players by "touching them on the shoulder" or through some other generally peaceable interaction. That's all well and good, but not once do we see any of this happen. If we're to engage with these people and their story, we need to see the reality show, and actual reality unfold. Instead all I saw was a lot of forced animosity, a terrible sexual encounter (interpret that any way you wish), and some rather bland death scenes. There's no sense of escalation and no one knows the reality show premise is a sham. I know this, of course, but for the people that matter, i.e.: the "hot kids," they're never given a chance to figure out what is really going on.

Your basic scenario of "hot kids get killed at camp" is not developed enough for the type of story you are trying to tell. You appear to be attempting some blend of postmodernist subversion and meta-criticism but you are not well-versed enough in the genre to succeed. The story you want to tell is full of intrigue and double-cross. The story you've scripted is not. You also appear to be unfamiliar with basic literary terms. You mistake "MacGuffin" for "red herring," which is bad enough, but your use of MacGuffin (read: red herring) in the script suggests you don't know how it is employed. A MacGuffin is a motivator, usually a desired item, that drives the plot, such as the case in Ronin. A red herring is a false lead or misdirection, such as communism in Clue. You make a small effort to establish the Sheriff's brother as a red herring, which you incorrectly identify as a MacGuffin, but he only shows up twice, once at the beginning and then at the end as a corpse. There is no good reason to think he is the killer when your movie devotes absolutely no time to solving this mystery.

I note that you managed to sign both Eric Roberts and Danielle Harris for this project. While these names do carry some weight and brand-recognition, it is simply not enough to get me on board with your movie. As I stated at the beginning of this letter, you lack an instinctual understanding of horror cinema (or cinema in general) which prevents you from being able to properly tell your story through film. And that is what I am interested in: story. I can watch "hot kids get killed" in any number of horror movies. What I'm having a harder time finding these days is watching them die for interesting reasons in interesting ways.

Oh I dunno, my friend & me laughed through the whole thing.

You're more tolerant than most.