In an effort to better understand my feelings about Eega, I recorded myself as I tried to sort through my thoughts.


Never having seen and Indian film before now, I'm completely unfamiliar with the ins and outs of Indian cinema. I'd heard about the dance breaks, of course, but I don't think I've ever seen a film that has a choreographed song-and-dance number that wasn't a musical or Charlie's Angels 2.

I also don't know if ADR is the standard, but all of Eega's dialogue has been looped. At first it was distracting, but I got over it and was able to focus on the much more outrageous stuff happening onscreen. By which I mean the story.

Eega's about a man who's killed by his romantic rival and is reincarnated as a housefly and exacts a terrible vengeance upon his murderer. He can't do it alone because he's a fly so enlists the help of his former would-be girlfriend. Together they chip away at Sudeep's sanity, driving him to crazy extremes in an effort to rid himself of what appears to be one really annoying fly.

Part of my problem with this film was the hype. Eega was oversold. Given how much TAD raved about the film ahead of time, I expected something mind- and genre-bending on the scale of Holy Motors. Instead I watched what felt like a too long and terrible Disney film. To the film's credit, it does have some fun and funny moments a great intermission title card but in the end, it just wasn't the "grade A, all-caps ENTERTAINMENT of the highest order" I expected.

Also, the film doesn't feature any eye-poking whatsoever. Which is partly what sold me in the first place. 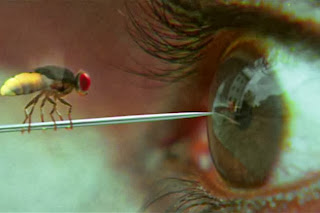 All-in-all, while an accomplished film chocked full of violence, humour, and feeling, Eega just wasn't for me.

What was more my speed was Bless You, the animated short that preceded Eega. A man sneezes, the force of which sends him rocketing into space. As he ascends into the heavens, he unravels until there's nothing left. Weird and largely one-note, this film was an unexpected treat.
Posted by DM at 13:27