To me, Cheap Thrills sounded a bit like Would You Rather, a film I didn't like. So it was with some reservation that I sat down to watch two dudes humiliate and debase themselves for cash.

Craig's life is slowly falling apart: he's just lost his job and is days away from being evicted. By chance he meets and old friend, Vince, in a bar and the two hook up with Colin and Violet, freewheeling newlyweds looking for a good time. Colin and Violet offer up cash money for completing dares, and as day turns to night, the competition grows darker and more lucrative.

While playing on its characters' desperation, Cheap Thrills has enough respect for Craig and Vince that it stops short of turning into a pornographic showcase of self-harm. Sensitive to the audience's desire for spectacle, the film manages to pull off a series of increasingly humiliating and painful set-pieces without being preachy. It's easy for a film of this ilk to get caught up in its morality, but Cheap Thrills eschews moralizing in favour of rationalizing; Craig and Vince aren't hurting each other, they're hurting themselves.

While the point is often to wonder what you would do in a similar situation, the movie steps expands on this trope by allowing its characters to conduct their own negotiations. Since Craig and Vince have some degree of control over their situation, it complicates the relationships between characters and audience. We are drawn toward the characters, and then pushed away moments later as they make good(ish) and bad decisions, falling victim to their own and each other's greed.

There are only a handful of films that have made me turn away in fright or disgust, and Cheap Thrills is on the list. Not because I was scared or because the content is particularly offensive or gross, but through a combination of shock and gore. Normally, these things don't bother me, but the anticipation of violence and the very sudden onslaught of same caused me to shut my eyes. Chalk that up as a win. 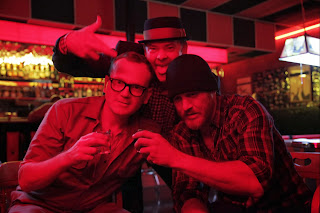 Cheap Thrills was paired perfectly with Remember Me (Memorable Moi). Mathieu suffers from a strange affliction whereby if no one is thinking of him, he begins to disappear. Mathieu goes to extremes in order to make people remember him. Hilarious and outrageous, the movie comments on narcissism and popularity in the age of the Internet.
Posted by DM at 08:00