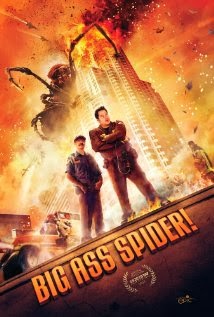 Here's a tag line for you: Big Ass Spider is big ass fun. Okay, that's terrible. But the movie is a fun time. If you're okay with spiders.

The film's ridiculous and reductive title goes some way to establishing tone. It's light and fun, and doesn't take itself too seriously. Described by its director as a love letter to the creature features of the 1950s, the film makes good on its promise of a giant arachnid running amok. In this case, the titular spider is loose in Los Angeles and it will take the combined forces of the US military and a shlobby exterminator to kill it good.

The giant spider is the result of a science experiment gone really, really wrong and the film (thankfully) falls just short of being a preachy object lesson in genetic modification. Still, it features a "mad" scientist who refuses to see the inherent danger in making things grow really big, and an ineffectual military response to the growing threat. Add to that nice-guy exterminator Alex who's determined to save his city and you've got all the hallmarks of a golden age monster movie.

Although the film features Greg Gunberg as Alex and Ray Wise as Major Tanner, Lombardo Boyar steals the show as as Jose, a Mexican-American security guard who, out of a weirdly literal sense of duty, sticks by Alex as he races around LA, running into and away from the monstrous spider. Jose's fearless heroism borders on naivete but the film stops short of turning Boyar's hilarious sidekick into a cheap joke.

Unfortunately, the same can't be said for Alex's love interest, Lieutenant Brant. Instead of being intelligent and confident, as you would expect from a woman in her position, she's both ignorant and deluded. Brant clings to the belief that the US military is totally capable of dealing with a giant spider and while this character trait is expected and accepted in Major Tanner, it reduces Brant to little more than a prideful and error-prone damsel in distress. And she does need saving, more than once. Even Mant and Mosquito, two send-ups that sadly only exist as films-within-films, had better female characters, and they're significantly shorter and a great deal more ridiculous.

That having been said Big Ass Spider is a fun ride. The spider is scary enough to keep you enthralled without totally freaking you out, and the movie is equal parts funny and gross. Somewhat unbelievably, I overheard a conversation damning the movie for its unrealistic timeline: "There's no way you could get downtown in twenty minutes." It's a movie about a huge goddamn spider. Honestly.

Big Ass Spider was preceded by The Last Video Store

Playing on the nostalgia that motivated BAS, TAD programmed The Last Video Store to start the show. In it, a delivery man unwittingly brings doom to a video store. Faced with the prospect of being assimilated by the Internet, a video store owner engages in an 80s style battle with a truly impressive monster robot.

On the risk of spoilers, did the ending feature a big ass shoe?

lol no. Rolled up magazine.