"It wasn't just the senseless theme episodes...the tonal vacillations, the wanton disregard for character or narrative arcs, the haphazard interjection of sentimentality, the intemperate shuffling of alliances and antagonisms..."  These are the words of Brett Berk, writing about why he's no longer watching Glee, but his criticisms can be levied against a number of different shows on TV, including American Horror Story. 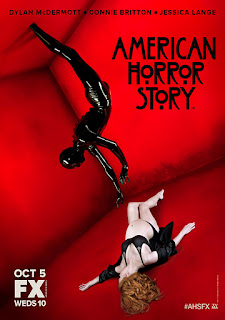 I'm pretty sure they sold it on concept art alone.

A confession, right off the top: I didn't watch the complete season.  In the beginning, Count Vardulon and I were keen to see this new horror show and we were covering it for TheAvod, but after weeks of disappointment, I just gave up.  I couldn't do it anymore--AHS was just that bad.  The Count insisted I watch the last three episodes.  That way we could at least pretend like we were sort of professional, discussing a current horror TV show on a horror podcast.  So I set aside nearly 3 hours of my life to watch the end of season one of FX's American Horror Story.

I will never get that time back.  Never.

The show follows the Harmon family, newly arrived in LA.  Ben is hoping the move will help save his marriage, although Vivian is finding it difficult to trust him after catching him in bed with one of his students.  This family drama--Ben's adultery--is the show's primary focus, which is strange given they've moved into the MOST HAUNTED HOUSE ON THE PLANET.

I can't stress that enough.  Their new home is, quite literally, full of ghosts.  If you read Berk's article in its entirety, he reveals the main problem with Glee it it's inability to live up to its premise.  Which is the exact same problem with AHS.  For a show that is supposed to be about a family that moves into a haunted house, very little of show addresses the haunting as story.  Rather, the show insists on rehashing its backstory in which Ben was unfaithful.  For every scene that moves the family drama forward, there is 30 minutes of bitching and recriminations.  That leaves about three minutes for what should be the primary focus of a show about a haunted fucking house: the ghosts. 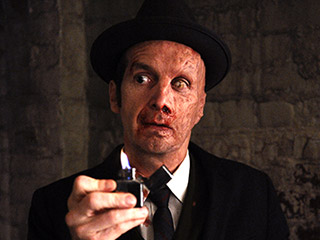 And this guy, who's not a ghost but had an awful lot of screen time, regardless.

Why so many ghosts?  Why this house in particular?  I don't have the answers and neither does the show.  In the beginning it seemed like each episode would be devoted to a specific murder and haunting, but as the weeks dragged on, ghost stories intertwined and the show wove a tangled web of histories and chronologies.  Adding insult to injury, AHS steadfastedly refused to establish any rules to govern its ghosts.  Why do some appear and others don't?  Why does one change her appearance when no one else does?  Who can see them?  Who can't?  How is it that a ghost can interact with the physical environment in the same manner and with the same effect as the living?  And how, exactly, does a ghost buy house paint?

The only answer I can give is, because.  Because AHS exists solely for the purpose of putting weird shit on TV each week with no concern for story or character.  The show is novel, certainly, but novelty should never be confused with quality.  Unfortunately, the show pulled an audience that failed to understand the difference, that got caught up in the strangeness of it all without stopping to think about what they were actually watching.

It made no sense that Tate was the Rubber Man.  Vivian's pregnancy was ultimately pointless.  Constance never did have a hidden agenda.  These are just some of the unfulfilled plots that were strung out across the thirteen episode season.  Other story lines were abandoned outright while others were never pursued: Abby was killed off for no reason, people die and disappear each week with no consequence, and the house itself may actually be a force of evil.  Under-developed and over-produced, AHS gave off the impression that it was made by someone with limited experience in telling a story, and even less experience with horror. 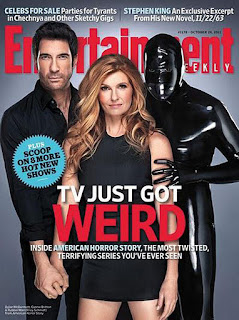 Further proof that the entertainment industry doesn't understand the difference between scary and irritating.

Sentimental where it should have been serious, impulsive instead of suspenseful, and lacking any common sense, AHS was less a horror story than a show about people, both living and dead, with too much emotional baggage.  Horror isn't about dealing with personal shit, it's about getting over it.  Facing fear instead of nurturing it.  Granted, the Harmon family did find peace, but only in death.

If only the show would die with them.  But because the show pulled an audience, it's been renewed.  I have no idea what's planned for season two, and have no interest in finding out; AHS was a huge disappointment, a tedious drama dressed up as a horror show.  Only the final episode, with its Beetlejuice-inspired plot was watchable, but I much would have preferred to watch Beetlejuice instead.
Posted by DM at 17:53

Is the whole antichrist thing at the end out of place? Coming from someone who hasn't seen the series, a haunted house story going in that direction seems kinda out of place.

The antichrist story was dropped like a hot potato. It had no business being there to begin with, made zero sense, and had no payoff.

I'm still unclear on how a ghost can impregnate a woman.

It's funny how the show started off with alot of potential, to quickly becoming around the halfway mark, one that I really didn't give much of a rats ass about. Needless to say had Ryan Murphy not been responsible for "Glee", this would not have been made.

Nicely put. You pretty much nailed it.