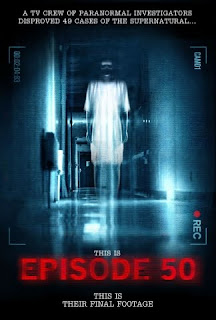 Have you seen or heard of Series 7?  It's brilliant.  Really.  The film is presented as a marathon, the seventh series of the The Contenders, a reality television show.  Not once does the film break its format, and you really do feel like you're watching an intense TV show.

For its 50th episode, the reality ghosthunting show, Paranormal Investigators, will spend a weekend inside the West Virginia Lunatic Asylum, one of, if not the, most haunted buildings in the country.  Unlike other shows, Paranormal Investigators seeks to debunk hauntings, and the film opens with clips from episode 49 in which they explain how and why one couple is experiencing "paranormal" activity in their home.  As episode 50 begins, the PI crew learn they won't be exploring the asylum alone--they'll be joined by ASSC, a small group of bible-thumping true believers who have an axe to grind with PI's leadman, Jack.

As day turns to night and then back to day, the PI and ASSC crews experience different but related phenomena, and each come to their own false conclusions as to what it all means.  In a bizarre and narratively irrational twist of events, both crews are forced to leave the asylum in order to resolve the plot.

The film's premise is kicked off by Jack's meeting with the asylum's owner (I guess state institutes can be purchased by private citizens in West Virginia).  The owner is a world-class scumbag who claims to have repeatedly "broken all of God's commandments" and now that he's dying, is worried he's going to hell.  He's hired PI and ASSC to find proof of ghosts because, according to his logic, if ghosts are real then so is hell.

In his review, Count Vardulon referred to Episode 50 as "confirmation bias: the movie."  It's an apt re-titling.  Jack and the rest of PI record solid evidence of ghosts but parlay that into disproof of an afterlife.  ASSC, on the other hand, are being jerked around by a demon and they turn that experience into proof of ghosts.  Anyone who stayed awake in grade eight science will tell you both teams are running their experiments backwards, re-interpreting results to reinforce their theories.

Thing is, Jack secretly wants ghosts to be real.  In fact, his desperation drives his ghost hunting.  So why, when presented with incontrovertible evidence for ghosts, does he continue to insist the opposite?  Because this movie doesn't understand how to write a character or tell a story.  If Jack were self-destructive that'd be one thing.  If he were a fervent non-believer, that'd be another.  And if he had some kind of hidden agenda, that'd be something else.  But Jack is just a self-righteous ass, prone to convoluted flights of "logic" that the film uses to maintain conflict within its plot.

Speaking of logic, let's take a closer look at the inciting incident.  So this guy wants to know if there's an afterlife because he's worried he's going to hell for being a murderer.  I'm no expert, but I'm pretty sure if you believe there's a hell, you must, by logic, believe in the possibility of going there.  Also, logically speaking, if ghosts exist, so does the chance that your spirit will not journey to the netherworld but will be stuck in this world after you die.  Proof of ghosts doesn't actually equal proof of hell.  The film confuses theology and religion with spirituality.

Episode 50 is well shot, with good effects, but that's about all it's got going for it.  The film is awash in bad dialogue and logic problems, and is a mess of plots, philosophies, and locations.  But, perhaps worst of all is that it's not a found footage or mocumentary film, and it should be.  Episode 50 should be Paranormal Investigators' raw footage, cobbled together to create a complete story of their shoot.  But it's not.  It's a conventional narrative film.  A film that repeatedly breaks scene.  And I don't mean in a tearing-down-the-fourth-wall kind of way.  I mean the film constantly switches back and forth between its reality TV conceit and standard film format, forcing both the characters and the audience disengage and re-engage with the proceedings over and over in different ways.

Also, it's got this four-class paranormal hierarchy which is totally stupid.  According to Episode 50 poltergeists are...malicious tricksters?

The truly puzzling thing about this movie? The opening 'episode' - and the poster, there - suggest that the team has always discovered rational science-based causes for everything. And then they get to the hospital and we discover that they meet what we would call 'ghosts' so regularly that they're completely blase about it.