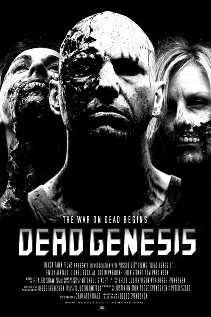 There are some things in this world that I will never understand.  Like how the universe is expanding.  Expanding into what?  Or why anyone ever bought a Hummer.  You live in Yorkville, you jackass!  Another thing I just don't get is deliberate hand-held camerawork in any movie that's not found footage or first-person POV.

Dead Genesis establishes early on that it has a crew of (reasonably) skilled filmmakers.  The first couple of scenes are filmed with a certain amount of competence, including some artsy slow-mo.  But then the movie switches from mounted to hand-held camera and this, in part, makes the film unwatchable.  The change in technique comes when a documentarian heads into the woods to spend a couple of days with a group of zombie hunters.  Now if all the hand-held stuff was shot through her camera, that would be fine stylistically, but the film maintains its third-person POV.

And I just don't get it.

Moreover, she proves to be the world's worst documentary filmmaker.  And that's the other thing that makes Dead Genesis such a painful experience, the writing.  The dialogue, the characters, the plot (such as it is), are all terrible.

After the initial panic at the onset of zompocalypse, humanity has come to terms with the new status quo.  Most people live in safe zones, but some live on the outskirts of civilization, waging a war on the zombies.  The Dead Heads are one such group, perhaps the most well known hunters around, and Jillian has been granted permission to spend two days with them, documenting their activities.  Her goal is to show everyone back in the safe zones what the "war on dead" is all about.

Judging from this synopsis, you would expect the film to be largely shown through Jillian's handycam, but it's not.  As I said, the story is entirely told with an omniscient and poorly-wielded hand-held camera.  You might also expect the Dead Heads to be a curious group of interesting folk, but no.  Half of them don't even know why they're there, and the other half, well, we don't get to know them at all.

Dead Genesis has a built-in plot device that should introduce its characters in a relatively simple fashion--Jillian's documentary.  But because Jillian is so bad at her job, she only interviews half the Dead Heads, and though she asks them why they joined the group, none of them can provide the audience with a satisfactory answer.  To make matters worse, the Dead Heads appear to resent Jillian's presence, but again offer no good reason why.

Adding further insult to injury, outside of a few half-hearted attempts to capture the Dead Heads on camera, Jillian fails to film anything at all.  Dead Genesis is rife with clumsy inter-personal conflict and zombies, but Jillian resolutely captures none of it.  The one time she makes a real effort to video the hunters, she's flat-out told not to, and her camera goes back in her bag.

Dead Genesis is clearly a movie that doesn't know what it's about.  With a thin story and flimsy characters, the film serves as little more than an elaborate make-up screen test.  The zombie effects are rather good, but everything else about this movie is so bad that it's not worth seeing.