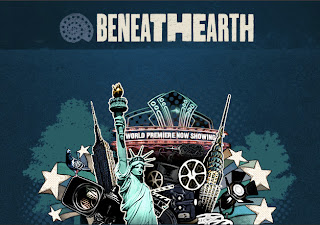 Not too long ago (late October it was), I juried an on-line film festival.  Beneath the Earth is not a genre film fest, but open to all filmmakers who have a short film in the can.  This year's Best Film is Photographs.  The Audience Award went to After Ever After.

This animated short, about an elderly woman who finds a Polaroid camera, is a powerful emotional journey.  After picking up the camera, the nameless woman takes photos of herself all over town.  It's a fun afternoon, but tinged with a sad loneliness because she's all by herself.  The film's final moments are deeply moving, as the true nature of the photos are revealed.

Photographs is a beautiful film, and was my personal favourite.  Silent, in the sense that there's no dialogue, the film captures emotion and expression through action and soundtrack.  The hand-drawn animation is particularly good and gives the film a nostalgic quality, which is very apropos.

After Ever After (Winner, Audience Award)

Sidney has broken up with his girlfriend and is devastated.  Just devastated.  But after a good cry, he believes he's okay.  But he's not okay, he's got four phases of post-break-up emotional and mental instability to live through before he can start feeling fine again.

Getting dumped sucks, and After Ever After artfully captures that suckiness through Sidney's imagination.  We see the world through Sidney's eyes, and experience his self-pity, denial, and eventual acceptance, as a series of small fantasies; Sidney's outlook is reflected back at him by what he sees.

Sidney as a character is rather pathetic, and his maudlin attitude detracts from what is otherwise a good movie. The film's strength lies in its visuals, and effectively uses imagery to communicate with the audience.  Getting over a bad break-up is something we can all relate to, After Ever After does a great job expressing the loneliness and pain of the experience.

Oh hipsters.  So...ironic.  I don't even know what that's supposed to mean.  Much in the same what that I'm not entirely sure what this movie is about, but that didn't stop me from really enjoying it.

Shortly after he's dumped by his girlfriend, Fletch's fixed gear bike is stolen by a dude dressed as a pink unicorn.  Life continues to get worse for Fletch, as he starts hemorrhaging twitter followers.  But when he courageously embarks on a journey to retrieve his bicycle, he starts gaining followers and his girlfriend returns to him.

At times clever, weird, and incomprehensible, #omgimtrending asks its audience to consider what's really important to them.  And also what FTW means.  The movie is light, pokes fun at hipsters, and is just a tiny bit recursive.  Well deserving of its Best Cinematography award, the film is extremely well made and fun to watch.