As per Count Vardulon's request, I have produced this article on the gender politics and masculine discourse of Robot Jox. 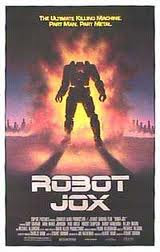 After the devastating effects of WWIII, war was outlawed and all geopolitical conflicts are resolved through one-on-one robot battles.  The robots are giant constructions and are piloted by a jokey, or jock.  The Russian Confederation and the Western Market are currently battling for the sovereign territory of Alaska, rich in natural resources.  A best of ten series of fights, overseen by a neutral group of referees, determines the winner.  In the ninth battle, Confederation jock Alexander kills his opponent and the Western Market announces that Achilles will pilot their robot in the final fight.  Achilles is one of the greatest jox to have ever lived.  He's won all nine of the battles he's fought an is coached by Tex, a former champion jock.  During their battle, Alexander pulls an illegal manoeuver which threatens the lives of the spectators.  In his attempt to block Alexander, Achilles unwittingly kills the people in the stands.  The referees do not name a winner and another battle must be fought.

Achilles and Tex are members of the old school, and although their backstories are never revealed, it is assumed they worked and trained very hard to become the skilled professionals they are.  Their legacy is threatened by a new breed of jox, pilots who have been bred specifically for the purposes of controlling the fighting robots.  Achilles' and Tex's disdain for the younger generation is summed up by their use of the slur "tubie", meant to insult these test tube babies.  Achilles takes particular offense to Athena, a female jock, believing that women cannot pilot robots.  Athena is not offended by Achilles' overt chauvenism; she does not understand gender inequality, and possesses the same skill, agility, and fearlessness as her brothers.  In fact, Athena proves herself better than her peers when she wins a training competition. 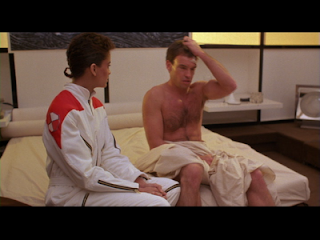 She examines his body and finds nothing special.

Achilles eventually takes an interest in Athena, and although he displays a certain sensitivity toward her, he still harbours a deep-seated sexist attitude regarding jox.  Athena leverages Achilles' sexual desire, using her femininity to gain access to his quarters, pretending to be interested him.  When she gets Achilles into a vulnerable position, she shoots him with a tranquilizer, explaining that she will pilot the robot in the final fight.

It is necessary for Athena to usurp Achilles because he undermined her first chance at fighting.  After Achilles concludes his tenth match he quits his job as robot jock.  Officially, Achilles has fulfilled his contract with the Western Market, but he is actually suffering from a crisis of conscious, feeling responsible for the deaths of 300 spectators at his last fight.  When it is announced that Athena will pilot the robot, Achilles returns to work with the goal of replacing Athena in the cockpit.  On the surface, Achilles' actions are chivalrous--he does not want to see Athena get hurt, but the fact remains that Achilles simply does not believe Athena capable of piloting the robot.

After Athena drugs Achilles she hijacks the robot and faces off against Alexander.  She gains the upper hand early in the fight, but quickly looses her advantage as Alexander and his robot prove to be better than she.  Athena is knocked unconscious and as the robot lies prone on the ground, Alexander stands over her ready to deliver a final, crushing blow.  Alexander's robot has a secret weapon.  Hidden in what can only be described as the robot's crotch, is a chainsaw.  Straddling Athena, Alexander activates the chainsaw, lowering it toward her with the intent of cutting her robot open and sawing her in half.  It is the ultimate insult to Athena's feminism, a violation of her body--both her physical body and her extended robot body--and an act of unquestionable male dominance.  Unconscious, Athena is powerless to stop Alexander, and survives only because of Achilles' intervention.  A true hero, he rescues her from the cockpit at just the right moment, and defeats his enemy in one last fight. 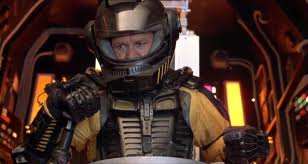 Don't even get me started on the film's geopolitics! At least his robot isn't all red.

Robot Jox shares much in common with action-adventure film, and is, in essence, an arena- or competition fight movie.  Because the fighters pilot giant robots from inside a cockpit, the robots can be viewed as extensions of the physical body; the robots' movements are twinned with the movements of the jox.  Furthermore, damage to the robots can mean physical harm for the pilot.

Action movies, more so than any other type of film, are built on spectacle.  Part of that spectacle are the action sequences themselves, but spectacle also includes elaborate displays of masculinity.  Normally, masculinity and the male are displayed through the bodies of action stars such as Jason Statham and The Rock, but in this case, the robots act as a proxy for the male body.  The obvious example of the robot/male pairing is the chainsaw hidden inside Alexander's robot, which he whips out in a masculine display of power.

The action genre generally promotes rebellion, universal liberty, and self-determination, and there is nothing inherent in the narrative conventions of action movies that dictate its heroes' gender.  Usually following one of two conventional plot-lines, action movies are either about a lone hero who has the skills necessary to overcome adversity and defeat the bad gay, or the films follow a small group of people led by a hero who takes them out of the "wilderness" and back to "civilization".  There is nothing to suggest the hero need be male, but the patriarchal nature of mainstream cinema sees a male hero become the focus of power. 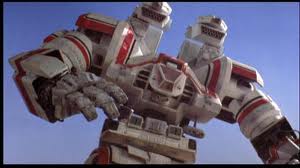 Athena's pedigree would suggest that she is just as capable as any man, including Achilles, but her ability to pursue the action plot to its conclusion--to defeat the bad guy--is undercut by her inability to effectively pilot the robot.  Once she's knocked unconscious, she transforms from potential heroine to woman-in-peril, a sleeping beauty in need of rescuing.  But Athena's shortcomings aren't a product of her gender.  Rather, her failure stems from something outside herself, namely the nature of the robots.  The robots of Robot Jox are male.

Many action movies, despite their initial gender neutrality, are set in distinctly male environments like battlefields, prisons, and sports arenas.  In each of these locales, masculinity is on display, performed for both the characters and the audience.  In this sense, there is a particular status associated with male performance, but it must be understood sexual performance not what's on display.  Rather, it's the spectacle of the powerful body, to which weapons and explosions are added to increase the hero's status.  The robots in Robot Jox are enormous machines, outfitted with a variety of weapons, and are capable of space flight.  In a performative capacity, Alexander's phallic chainsaw is overkill, and his use of this weapon on the helpless Athena is a sexual power play in what is supposed to be non-sexual combat.  The chainsaw doesn't make him more masculine, it only reinforces his position as the antagonist.

Supporting the male environment as the milieu for action, are the costumes and uniforms associated with masculine performance.  As part of her plan to take control of the robot, Athena dresses in Achilles' uniform, hiding her face behind the helmet's face shield.  Dressed this way, Athena is mistaken for Achilles and she gains access to the cockpit.  She raises suspicion when she fails to properly greet the ground crew, and is outed as an impostor when she reacts to being smacked on the ass.  Being unfamiliar with the traditions of the ground crew, Athena is unable mimic Achilles' behaviour; she can dress as a man and even pilot a robot, but she cannot effectively engage in male performance. 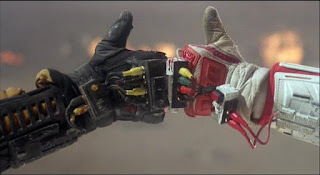 Robot Jox was released in 1990, at the tail end of a decade that celebrated masculinity through increasingly spectacular displays of bodies, action, and violence.  Although technically a science-fiction film because it's set in the future and features giant fighting robots, Robot Jox can be viewed as a competition or fight movie and partly belongs to the action-adventure genre.  Understood in this way, the film may be analyzed in terms of male performance and spectacle.

In the film, masculinity is displayed through robot fights, where the robots represent physical extensions of the male body.  Masculine performance includes combat, the traditions surrounding combat, and a general attitude of arrogance indulged in by the jox.  Achilles' masculinity is further bolstered by his sexism.  Achilles' chauvinism is initially introduced as a character flaw, but his gender politics are reinforced by the film's narrative; Athena was bred to pilot robots, but she is categorically unqualified to participate in the male arena of robot fighting.  In the future world of Robot Jox women may be many things, but they are not jocks. 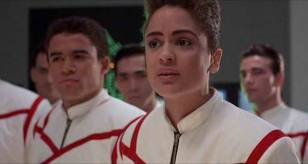 Nice analysis of gender in "Robot Jox" of all films!

I love it when high brow thinkings is applied to low brow cinema. You have given me a completly new way to look at a film I consider a great guilty pleasure.

Thanks Elwood! Sometimes it's fun to think too much and too hard about some things :)