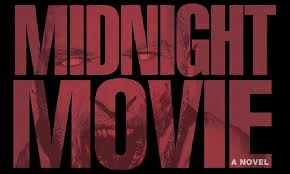 There are three bookstores where I live.  Two are used bookstores, one of which I can't go into because it induces acute claustrophobia.  And I'm not claustrophobic.  The standard bookstore I also shy away from because it a) has a terrible selection, and b) is so poorly organized that I get anxious and pissed off just thinking about it.  Also, the two women who work in there radiate an attitude of unfriendli- and unhelpfulness.  Like I'm interrupting their day by wanting to spend my money in their store.  Jerks.

So anyway, last time I was in O-Town, I was keen to visit a proper bookstore.  Unfortunately the horror section at the Chapters on Rideau Street kinda blows.  It's weird because their mystery, sci-fi, fantasy, and "literature" sections are well-stocked.  But for some reason, horror is two measly shelves, way at the back.  And it's all zombies and vampires and I'm so tired, so very tired of it.

I stared at the shelf.  The shelf stared back. The people sitting by the window were being noisy and wanted to tell them to "Shut the crap up!" because I was mad, mad at the books, which is just stupid when you think about it.  I stared at the shelf some more and then I saw it: a slim volume crammed between two other, fatter books.  Midnight Movie by Tobe Hooper.

In 2009, Tobe was invited to SXSW to screen Destiny Express, a film he made in high school.  Tobe wasn't sure how Dude McGee got a hold of his movie, but he agreed to go, and together with about thirty other people, he watched the nonsensical flick.  Shortly after that, some strange things started happening in Austin.  And then elsewhere across the US.  Soon the entire country was suffering some kind of pandemic, a nation-wide case of the crazies.  All because of the crap film Tobe Hooper made when he was sixteen.

In an interview Tobe describes his book as being "cinematic."  And it is.  The story is told through interviews, blog posts, twitter feeds, and news clippings, and has a distinctly documentary feel about it.  The format works to great effect, presenting the material, as insane as it is, as fact.  Of course, as is the case with many documentaries, some conclusions are foregone; it's not always a surprise who lives and who dies.  But the story is always interesting.

And sometimes brutal, violent, and gross.

I always like stories and movies about "the scariest movie ever" so I was keen to read Midnight Movie.  In a fun twist, Tobe's teen-aged masterpiece isn't particularly scary or good.  But it strikes a nerve with its audience. Weirder still, Tobe has no memory of the film; he knows he made it, but that's it.  Memory loss and the controlled access to information are common themes in Midnight Movie, suggesting that some of our life experiences are at the mercy of a force we can't control.  The book doesn't go so far as to to question the nature of experience (thank God) but sometimes there's just something magical about watching a movie with a roomful of people.

Since the book was written by Tobe Hooper (with his writing partern Alan Goldsher), and since Tobe appears as a character in the book, one wonders how much of Tobe is really in there.  Again, in an interview he says he's not nearly as misanthropic as his character in Midnight Movie, but he talks about Chainsaw an awful lot, playing on the fact that he's still riding that train.

Midnight Movie, which I read in record time, was a real treat.  I've seen a lot of shit films and it was fun to read about one for a change.  I can even sympathize a little with the violent reaction to Destiny Express.  But I'm not about to set any fires.