The Walking Dead (season one) 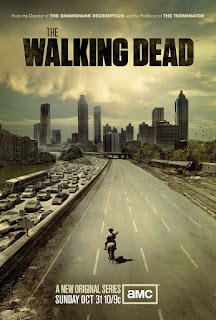 Right around the time the comic was making waves, I was reading another, different comic about zombies.  I never did read The Walking Dead.

The announcement that AMC was producing The Walking Dead for TV was big, exciting news--even for non-comic people like me.  The first of its kind, the series features a group of zombpocalypse survivors trying to make their way in a new world.  You'd have to have something seriously wrong with you if you weren't immediately sold on the premise.  And the show's record numbers proved that everyone was on board for televised zombies.

The only problem is that The Walking Dead never did manage to get past its premise.  The show garnered interest because it was new, novel, and different from all other programs.  Banking on these things, The Walking Dead never bothered with story or character development, and motored through its six-episode first season on cruise control:
So very little happens that it's impossible to actually describe what's going on.  It's a serialized television show with no forward momentum.  Little changes from one week to the next; there are no challenges that can't be overcome within the space of 40 minutes, and no real threats to anyone's well being.  Yes, there are zombies but The Walking Dead isn't really about zombies, per say.  It's supposed to be about the people (the title is a play on words), but the people, like the story, aren't exploited to their full potential. 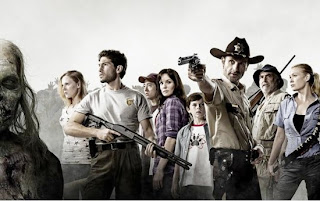 Pictured: unfulfillment.
While Rick is positioned to be the lead in the show, it's an ensemble cast.  But since we don't ever learn anything about anyone else, Rick is the lead.  This wouldn't be a problem if Rick were interesting, but he's not. Even more frustrating is the fact that Rick is surrounded by potentially compelling characters, but their development is just as stunted as Rick's.  In fact, everyone's problems are so inconsequential to the show that most are addressed and dismissed in the same episode: a wife abuser is killed by zombies; a crazy man kills himself; and a woman shoots her zombified sister on her birthday.  In the final episode, one of the survivors chooses to stay at the CDC and die in a fiery explosion--it could have, indeed should have been a poignant moment in the show, but since we don't really know a thing about this woman, we can't understand her choice.

Perhaps the most frustrating thing about the The Walking Dead is the haphazard nature of the writing.  In episode 1, Rick meets Morgan and tells him he will speak to him every morning on the radio.  Not until episode 5 does Rick pick up the radio and make the call.  It's one of the show's better moments, Rick speaking to no one, sending his words out into the ether and clinging to the desperate hope that Morgan is listening on the other end.  It would have made for a great recurring theme, but it only happens this one time.  Nor do we ever find out what happened to Morgan.  Another loose end takes the form of Merle Dixon, the resident white trash racist.  He gets chained to a pipe and winds up cutting off his hand to escape what he perceives as an inevitable zombie attack.  Merle, too, is never seen nor heard from again, though his potential storyline was rife with possibilities for real drama and conflict.

I stand by my statement that a show like The Walking Dead was and still is a good idea.  But a good idea needs a good follow through, and The Walking Dead, quite frankly, stalled in development.  The one thing the show does manage to get across is a vague sense of nihilism, but that's due mostly to everyone's lack of agency and action, rather than say, constantly having to run away from fucking zombies.  It resonated with me, though--I have no hope for a promising second season. 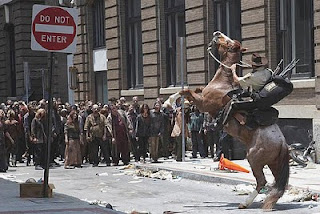 Perhaps this is why the whole writing team has been sacked and all new writers being brought in for the next season.
Must say I have been interested to read opinions of the show by people who haven't read the comics.
On a random note, you said you were reading another zombie comic series, but call yourself a non-comic person? I think the stigma of superhero comics makes some people shy away from calling themselves readers, when in fact that is exactly what they are, just readers of the more adult titles that are out now.

I will fully admit to being interested in comics, I just don't read a lot of them.