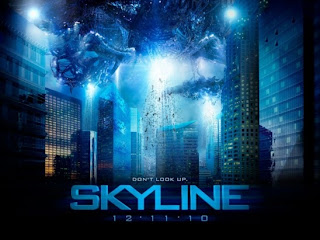 I saw the teaser trailer for this movie and was immediately sold.  I knew nothing about it--just that aliens invaded and sucked people up into the air and something about evil lasers...

As it turns out the film doesn't have much to offer beyond that.  Aliens arrive, start abducting people en masse, and we're stuck in an LA condo with Eric Balfour and Turk.  The drama is centered on the folks trapped in the building as they fight for their lives against the alien menace.  It's simple, it's straightforward.  Sure, the interpersonal conflict is awkward and largely unnecessary, but you don't go to see a movie like Skyline for the character study.

You go for the aliens.

The movie culls from a number of different sources.  The spacecraft look like something out of The Fifth Element, and their ascendo-rays are eerily similar to the deadly light blasts from the bugs in Starship Troopers.  The smaller flying aliens are dressed-up squiddies from The Matrix, the smaller terrestrial aliens are shrunken monsters from Monsters.  Then there are the big guys.

They've got mouths for hands.

Whatever Skyline may lack in narrative sophistication is made up for by its emic approach to the subject matter.  Imagine ID4 told from the point of view of some random dude on the ground.  That's Skyline.  And the movie does a good job keeping pace with the invasion right up until the end.  Then it all goes to hell.

I almost mean that literally.

The film kicks it into high gear toward the end.  Erik Balfour is surrounded on all sides by the alien menace and they just. Keep. Coming.  No amount of military firepower can stop them and it's an explosive special effects extravaganza! i.e.: the test real.  And it looks good, too, for the most part.  But it doesn't end.  Not when it should.

Skyline comes very close to delivering a fatalistic, nihilistic alien invasion story.  Unfortunately, all that goes out the window when the filmmakers push their talent too far.  Showing off for the camera, Skyline's confined story explodes into a mess of idiotic cliches and tonal shifts that no amount of aliens can make up for.
Posted by DM at 22:43

I haven't seen "Skyline" but around the time it came out I first saw a trailer for "Battle: Los Angeles" and suddenly I could care less about "Skyline."