A Night at the Opera

I love opera.  It think it's amazing.  The signing, the music, the presentation--all of it.  And opera, like any other artistic medium, has limitless potential for horror. 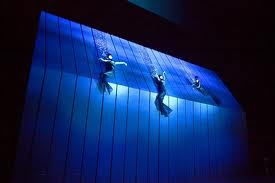 The other night I went to reprise showing of the Met's broadcast of Das Rheingold.  Written by Wagner, this is the first of four operas that are collectively known as The Ring Cycle.  A few years ago, the Canadian Opera Company mounted a Ring Cycle and now the Metropolitan Opera has commissioned a Cycle of its own.

Das Rheingold tells the story of the god Wotan, who must find a way to prevent his sister-in-law, Freia, from being taken away by a couple of giants.  Wotan learns about a ring, forged from gold stolen from the Rhine River, that will give its wearer limitless wealth and power.  The ring is in possession of Alderich, a gnome, who uses it to force his brethren to mine more gold.  Wotan captures the ring and the gold, and returns home to rescue Freia.

If any of this sounds at all familiar, it's because Tolkien borrowed from Wagner when he wrote the Hobbit and LOTR.  Peter Jackson was able to capture the magic of LOTR for the screen, and Robert Lapage has done the same for The Ring Cycle. 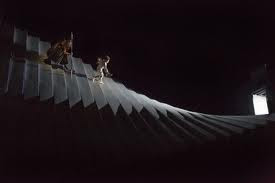 Often described as a visionary, Lapage has this amazing ability to first conceive and then make real some truly mind-blowing stage effects.  I have seen four of his operas to date and each one has left me speechless.  In his debut double bill Bluebeard's Castle/Erwartung singers defied gravity and emerged out of a mini-lake that flooded the stage.  In Siegfried, actors on wires hung out in trees and formed the shape of a dragon's head.  Finally, in Das Rheingold, Lapage again turns to gravity-defying wirework this time incorporated into a moving set.

Each of these operas also benefit from a dark and fantasmagorical production design, similar to what Del Toro does and Tim Burton used to do.  I suppose it's a little sad that some of the best genre production I've seen in the past decade has been on stage and not screen.  You would think film would have a corner on the lavish production market, but Lapage's most recent creation puts horror film to shame.  His moving set, lighting design, and wirework--all of which are presented for a live audience every few nights--blow every movie with a similar or greater effects budget out of the water.

If horror is looking for new directions, new inspirations, or simply a return to form, then it has to look no farther than the stage--which is appropriately ironic. 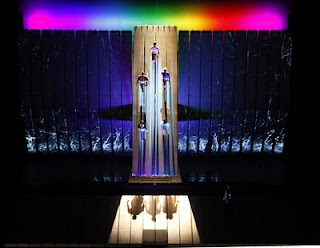