When you spend eight hours in a car with a close friend you haven't seen in a while, the time just flies by as you talk and talk and talk, catching up on months of separation. I wish I could tell you most of our conversation was full of enlightening repartee, witty banter, and incisive criticisms about 21st century social-economics, but the truth of the matter is that Lady Dinwhistle and I are just too foul-mouthed for that kind of talk. Mostly we talked about men.

However, in between musings on cheese and the benefits of living by yourself (pantlessness being primary among them), we did manage a relatively high-brow dialogue about exploitation in film. Lady Dinwhistle had some particularly interesting things to say--stuff I'd never thought of--and we found ourselves in total agreement on the topic of exploitative horror. 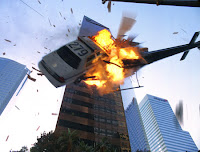 I'm a really good driver and this almost never happens.
Before I go any further, let me ask a question: what is exploitation, really? The word gets bandied about like a shuttlecock on a summer afternoon, but do we really know what we're talking about? I here define exploitation horror as either lurid, gratuitous, and/or sensationalistic depictions of sex/violence. This simple definition might appear to be too broad and by my standards any horror movie could be classified as exploitation--and I'm willing to entertain the notion that all horror cinema is, to some extent, exploitative--but my vagueness serves a purpose.

I don't care what your name is, you'll always be Dick Casablancas to me.
In 2009's Friday the 13th remake, Chelsea water skis topless. While this topless scene is wholly gratuitous, completely unnecessary and does nothing to move the story forward, Chelsea's decision to take her shirt off is perfectly normal, given that she is a) slutty, and b) an exhibitionist. For these reasons, her nudity isn't exploitative. But this same scene ends on an exploitative note. Chelsea looses her grip on the towrope and hits the water and, from then on, is only seen from the neck up--she's still topless but her breasts are no longer exposed to view. Swimming for safety from Jason, Chelsea hides under a dock. Jason stabs Chelsea in the head, though the dock, and yanks on his machete to free it from her skull. The effort of pulling the knife from Chelsea's head forces her body to rise out of the water before the blade comes free, giving the audience one last eyeful of boob. But because Chelsea is dead, the image, though still gratuitous, takes on a lurid quality, underscored with a hint of necrophilia. What's more is that because Jason is asexual, it doesn't benefit him to catch a glimpse of Chelsea's bare chest (his vantage point also prohibits a clear view of Chelsea). Rather, the whole kill scene was staged and shot for the benefit of the audience. The combined effect of dead, exposed breasts and the filmmakers' deliberate staging of the action makes this moment extremely exploitative and serves as a perfect example of how exploitation works as a relationship between the audience and the film.

Not pictured: the actual scene from the actual movie.
Chelsea's toplessness isn't exploitative because it's within the nature of her character to expose herself, but Jason's manipulation of Chelsea's body--pulling her bare chest from the water, is completely exlpoitative because Chelsea's agency is no longer a factor. In Freddy vs Jason, we find a example of how character agency works to create an exploitative situation while the camera work remains neutral. While people are hanging out at Lori's house, Trey takes Gibb upstairs for sex. The sex scene is not filmed in such a way that would make it exploitative for the audience--Gibb never exposes her breasts to the camera. In fact, part of the scene is shot from Jason's point of view, and he is, as I stated, disinterested in sex as a pleasurable or stimulating exercise. Thus Jason's POV is necessarily neutral. Instead, the exploitation is to be found in the relationship between Gibb and Trey; Gibb has self-esteem issues and letes the overbearing Trey boss her around. When they have sex, Gibb does all the work and Trey takes no interest in her pleasure. Trey is exploiting Gibb in the truest sense of the word--he takes complete advantage of her for his own benefit and with no regard for her welfare*.

Horror, more than any other genre, is well-suited to explore exploitation both a relationship between film and audience, and as a relationship between characters. Most discourses, and most films for that matter, generally stick to the more overt and easily identified type of exploitation, the visuals. I've said it before that sex sells, as does violence, but some of the sex and violence we see on screen, though keyed to a particular aesthetic, might not always be understood as exploitative when, in fact, they are.

And it's Rob Zombie with the win!
*What makes the scene all the more interesting is that shortly after they finish having sex, Jason kills Trey. Gibb is in the shower at this point but Jason doesn't kill her. Instead, he leaves the house. Sex doesn't figure largely in this movie, so it's almost impossible to comment on the "triumvirate of evil" in Freddy vs Jason, but the fact that Trey is killed immediately after having exploitative sex with Gibb, while Gibb herself is left unmolested, suggests a moral code not found in many slashers.
Posted by DM at 11:06