You Can Say That Again: The One-Liner

There are myriad reasons why we love horror. It makes us scared, makes us laugh, makes us think, and totally grosses us out. These movies take us to terrifying, far away, even make believe places, and they let us glimpse the horror next door. Through them we learn about our fears and ourselves, our society and our politics. Some of these films speak to us, and, for any and all these reasons, we return to them again and again.

But I believe there is another, subtler, perhaps even subconscious reason why we keep going back to our favourites: the one-liner.

A good line, well spoken, can sum up a character, a situation, or an entire film. Our instant recognition of the one-liner takes us out the film entirely but also manages to further our enjoyment. Below you will find some of my favourite lines of dialogue. What are yours?

This brilliant retort by Jesse "The Body" Ventura, after being told that he's bleeding, elicits a confused "okay" from Poncho. Bear in mind, the line is spoken by a man who thinks chewing tobacco will make you a "sexual tyrannosaur".

"We can't all drive a Mazda. Some of us have to work for our money."

Granted, I don't know much about the social economics of 1981, but I'm pretty sure even then Mazda wasn't all that. After hearing this, my roommate and I just kept repeating it to each other for the rest of the night.

"That is some fucked up shit."

Nathan Fillion echoes our thoughts with the understatment of the year.

Carly shushes her boyfriend who's trying very hard to convince her that using the bathroom in a backwoods hillbilly house is a bad idea. The line is profoundly stupid, but elevated to a higher plane of existence because it's directed at Jeremy Sisto.

"This is my boomstick!"

Bruce Campbell delivers one solid line after another in this film, so it was hard to choose just one. Other contenders were, "yo, she-bitch", "wrong book", and "klaatu, verata, nicthrumph...".

I don't think you're going to like what I have to say.
Night of the Demons

Spoken by Stooge in response to the suggestion they all leave Hull House because it's creeping everyone out. Stooge is there to party, and party he goddamn will!

From Dusk Till Dawn

"Psychos do not explode when sunlight hits them. I don't give a fuck how crazy they are."

Not the most memorable line of dialogue from this movie, mostly because it doesn't feature the word "pussy", but still one of my favourites. George Clooney speaks the truth and you can't argue with that.

Semper fi means "always faithful" and is the motto of the marines. When The Rock yells this line at Karl Urban, he's infected with evil. So is he being ironic, is the line meant to be some kind of comment on the ethical conduct of the military-industrial complex, or is The Searge merely expressing his disgust for his former marine buddy and goody-two-shoes, Reaper? We'll never know.

Night of the Creeps

Technically not a one-liner because Tom Atkins' delightfully suicidal Detective Cameron repeats the line a number of times, but this is how Count Vardulon used to answer the phone when I called because we both love it so much. 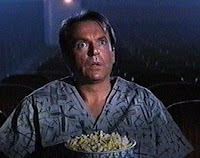 Ahhh Clooney in Dusk Til Dawn has some fangtastic one liners! As does Tarantino... BTW loved your Ms Horror Blogosphere entry ;)

Hahaha SO glad you included "Eat a bowl of fuck" It's probably the most fantastic one liner in the history of cinema. I need to start using it more in daily conversations.

Semper Fi, Motherfucker is definitely something I use in daily conversation. Im stoked you put it on here :)

A misquote? Really? You've forgotten that it'll make you a 'god-damn sexual Tyrannosaurus'?

I was paraphrasing, dammit.

In the 70s, the Mazda was actually a neat car to own, but its innovative Rotary Engine did not catch on. It switched to a more conventional design and became a poor man's clone of Toyota and Nissan.

I'd like to make a suggestion for that list. From the movie Carnage for the Destroyer, a film by Low Budget Pictures...Morgana, a pretty morbid chick, breaks apart from conversation to shout: "I smell nut cheese!"

And Troma's Poultrygeist also has a lot of great one-liners.