I found out today that Spielberg will not be remaking Oldboy with Will Smith. This is good news.

I had a conversation/argument with a friend about film. He argued that all movies should be made with *all audiences* in mind. To be fair, he was extrapolating from Tarantino's Inglourious Basterds, believing the movie to be both insulting to Germans and inaccessible to Anglos. But his point was that a filmmaker must keep in mind that diverse audiences around the world will likely see his film and said filmmaker must therefore make a movie to which all peoples can relate. I disagreed.

His argument brought to mind this one time I went to TIFF. My friends and I saw Mechanism. It's a great movie, very violent and painted a grim picture of Yugoslavia. The director was there for Q&A and this woman in the crowd stood up and denounced him and his film, telling him that as an artist, it was his responsibility to produce something beautiful and positive. In response the director said that, as a filmmaker, it is his responsibility to make movies. Nothing more.

Movies are made to be seen. That's a given. But most filmmakers are working within a particular culture, following a particular set of rules or values, and are, at times, circumscribed by particular directives within the film industry. All this is to say that a film made by country X is generally best understood by audience X. But that doesn't preclude the film from being shown in countries Y and Z--it's just the nature of the business.

Maybe I'm missing the point.
The remake industry is huge--I understand that. But I don't understand why. I don't understand why Hollywood deems it necessary to "Americanize" foreign film. A good movie will get asses in seats, weather it be in English or Greek. Granted there are movie buffs out there who prefer not to "read the movie" (my roommate is one), but I feel these people are both being cheated and cheating themselves out of a lot a really great films. The cultural appropriation and assimilation that takes place when a film is remade by Hollywood strips the movie of what made it special in the first place. I'm not only talking about story, I mean the movie as a whole--they way it looks, its atmosphere, sounds, editing, etc.

So, getting back to my disgruntled friend, what he fails to understand is that film will always find an audience. I, for example, like J-horror and though I don't speak the language or understand a lot about the culture, my personal enjoyment isn't lessened any because of these shortcomings. However, it would seem to me that Hollywood thinks differently. And what's worse is their apparent (or presumed) misunderstanding of the source material. Let The Right One In is being remade as Let Me In and this change in title puts an entirely different spin on things.

Do I think Spielberg could have done something interesting with Old Boy? Possibly. Do I think Will Smith is up to the task? I guess. But the film's morality, violence, and conclusion are so far outside the accepted norm for mainstream American cinema that I doubt Hollywood could actually make the same film. I'm sure there's a script sitting in a desk somewhere that's written in English and just as good. 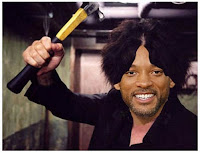 I'm always mixed on the remake issue but I think I'll slightly disagree with your well-put thoughts. If Platinum Dunes had announced plans to remake Oldboy, I'd have been sharpening my claws but Speilberg has done enough for me to trust his vision, even if it seems like an unnecessary film. I was kind of fascinated by what he and the seemingly universally loved Will Smith would have done with Oldboy, but sadly (or thankfully), I guess we'll never know.

I'm with you 100% on Platinum Dunes. And I agree, Speilberg and Smith are both great at their jobs. I guess I'm such a nerd for the original, I'd be nervous for any kind of remake regardless of who was at the helm.