Halloween is that special time of year when two of my most-loved creations on earth, horror movies and cake, are merged to form some of the most terrifying confections ever conceived by man. Not since Willy Wonka opened his factory to the public, have we ever been in more danger of being destroyed by our candied creations.

Not only does this cake let you eat a man, but you have the choice to feast on his decapitated head before moving on to the more meaty arm and shoulder. 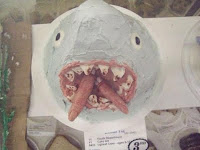 Hard to believe this cake only placed 3rd. If first prize wasn't a devil's food Orca being attacked by a marzipan Jaws, then the competition was rigged. 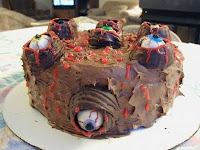 Two more entries in the "eye see you" category. I'm particularly impressed by the one on top because not only can this cake watch you eat it, but it can also hear and feel you devour its soul. 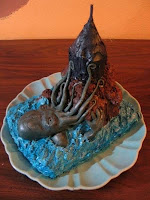 Remember that scene in LOTR? You know, that one with the giant octopus? Have you ever wanted to, like, you know, eat it?

Um... yeah... you do realize that's Cthulhu on the last cake before Jason, right? And that he's a better reference than the Squid from Fellowship?

(Who, weirdly, makes an appearance in a currently-airing beer commercial)

I know that. I just the LOTR comment was funnier.

You have a very broad definition of the word 'funny'.