Let me get one thing out in the open: I don't know shit about dance. I like dance. I like to dance. But I can't speak with any authority, or even intelligence, on the subject.

About a year ago, I was having dinner at a friend's house when she and her mother both dropped their forks and turned their attention to the wall. On that wall was a huge ass TV, and on TV was So You Think You Can Dance. Exactly 30 seconds later I was staring in rapt attention at the most creepifying dance routine I'd ever seen. Up until this point, I loudly claimed the single greatest dance was Round The World. It was simply brilliant the way each group of dancers moved to a particular part of the music. Plus it had aliens and skeletons. But my mind was so blown away by the dark and haunting Hommage to the Rabbits, that Round The World moved down the short list to number 2.

And then I left town and promptly forgot about it.

Randomly I saw another few episodes of SYTYCD about a month ago and was treated to more dark fantasy- and horror-inspired dance. I've talked before about how horror is seeping into the mainstream; advertisers have produced genre TV ads for cars and beer, and half the books in the teen section at the bookstore are horror or horror related. And now to find that same darkness has successfully worked its way into contest-driven talent shows...

I think it speaks to the versatility of the genre, how it can be twisted to suit the needs of whomever. In the same way that horror movies can serve as allegorical or cautionary tales, the essence of horror, its look and feel, can be spread across multiple platforms. Interdisciplinary is one word for it, if we want to get really academic. In the specific example of SYTYCD (and one shining moment on Dancing with the Stars), the combined effects of movement, music, and costume transcend pop-cultural boundaries and gain mass-market TV audience appeal. I couldn't possibly imagine an evocative love-themed dance with 10+ dancers. 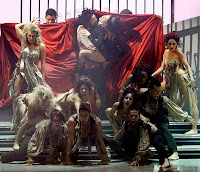 The video was removed by Dick Clark.
Posted by DM at 16:58