Ghosts of Movies Past 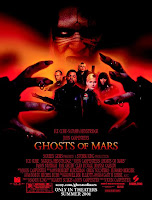 In spite of everything, it's not The Usual Suspects in space.
I saw this movie in theatres. For free. I kind of liked it, even though I knew it wasn't really any good.

It's the 22nd century and Mars is being terraformed. Presently, the population is made up of miners, criminals, and police. Natasha Hentsridge is one such police officer on her way to a mining colony to collect Ice Cube, an infamous murderer. When she and her small platoon arrive at the colony, they find the place empty. A lot of the miners are dead, even more are missing, and a handful of survivors have locked themselves into a jail cell. Eventually, the truth comes out--most of the miners were possessed by the ghosts of the long-dead Martian civilization and turned on everyone else. In an effort to save the survivors, Natasha Henstridge deputizes everyone, including Ice Cube, and they load up on guns as they plan to escape the colonly before they're attacked and killed. The only problem is that once a possessed body is killed, the ghost searches out a new host.

Clea Duvall's in it so you know something bad's going to happen.
Ghosts of Mars is a seige movie and borrows heavily from Assault on Precinct 13. But though Carpenter was a more accomplished, more mature filmmaker in 2001 than he was in 1976, Precinct 13 is actually the better film. Flat, with even pacing throughout and a delivered in a kind of monotone, Ghosts of Mars plods along creating no tension and building no suspense.

The film is framed by Natasha Henstridge delivering her report of events before a tribunal. By beginning the film in this way, we learn, right at the start, that everyone's going to die. That's not usually a problem if the whole point of the movie is to just watch people die in interesting or greusome ways, or to be emotionally maniupated by the filmmakers, but the deaths in Ghosts of Mars are so lacklustre (Pam Grier dies off screen) that the framing story appears to be completely uncessesary. When Natasha comes to the end of her tale, she tells a tiny lie but it is so insignificant that her honesty remains above reproach; at no point is the audience meant to think that Natasha Henstridge is being dishonest, thus there's no room for speculation on the nature of the events that have taken place, which just makes the framing all the more puzzling.

Marilyn Manson meets Boogeyman 3. Juiced.
Another strange move by filmmakers was to make the Mars social system matriarchal. This matriarcy naturally bleeds into the political system, meaning the planet is run by women. I can't for the life of me reason why this should be important other than to give creedence Natasha Henstridge's authority. But since the movie made a point of telling the audience that women are in charge, I'm almost offended by the film's demoting of Natasha by having her face off against some random demon and not Big Daddy Mars. Almost. Because the movie isn't all that good to begin with, I'm dismising the disappointing battle as bad writing.

The most unfortunate part in this sad tale is that Ghosts of Mars had, at its core, a pretty good story: human occupation on Mars discovers an ancient alien planetry defense that turns people into self-mutilating creatures of war. It comments on human nature, manifest destiny, the nature of the soul...I could go on. But the film doesn't quite get there. It also missed out on a good opportunity to deliver a downbeat ending but the film instead ends with Natasha Henstridge and Ice Cube wisecracking before wading into battle.

And oh yeah, there was life on Mars. A whole civilization, in fact. But that's not important. What is important is that this film was likely the gensis for Joss Whedon's Reevers.

craze-o-meter: 3, you'd have to be crazy to fuck this up

Mars camo pants: you can't see him from the waist down.
Posted by DM at 12:41