Do You Read Sutter Cane?

In the Mouth of Madness 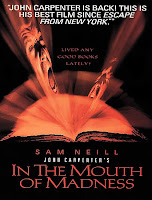 Sam Neill is an insurance investigator asked by a publishing house to locate a missing author and his manuscript. The author in question is one Sutter Cane, a man who writes Lovecraftian-style horror but with the wide market appeal of Stephen King (weirdly, I identified him as more a Peter Straub or Dean Koontz type though I have never actually read or know anything about either one). Sam Neill is joined by Cane's editor and the two of them head to New Hampshire to find Hobb's End, the town where Cane is shaked up. Problem is, Hobb's End is not a real town. But they find it anyway. Things get really weird when Syles, the editor, starts telling Sam Neill that Cane is creating reality, which is backed up by the townsfolk who claim to be characters in a book. Weird turns to downwright fucked up when Cane himself explains that he's writting the end of the world, that he's opening a portal through which evil Lovecraft-inspired monsters will arrive on Earth and destroy humanity. Sam Neill escapes Hobb's End and destroys Cane's final and deadly book. Sort of. He also travels back in time, or maybe forward, and delivers the book to Charleton Heston. The book is published, turned into a movie, and the story ends with Sam Neill watching the film you just saw. 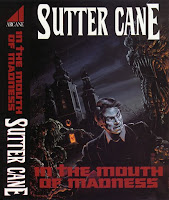 So very Lovecraft and yet so very not.
It kind of reminds me of that scene in Spaceballs where Lord Helmet and Colonel Sanders are watching Spaceballs. Only that was funny and this is very hard to understand. In the Mouth of Madness doesn't just play with the concept of reality and turn the film medium in on itself, it uses film to first deconstruct the notion of reality, and then to alter the reality of the story. And it is impossible to know where the break happens, where the movie becomes the story in the story.

That's not to say the movie isn't any good or doesn't make any sense. The move is pretty good and it does make a kind of sense. It feels more like a Carpenter movie should, with a slow build-up to an inconcievable or unstoppable horror. Desperation, perseverence, and monsters are all present and accounted for. This is the third film to deal with otherworldly evil, and the second to address isssues of religion and creation. It is the first to manifest alternate realities as human mutation. In the Mouth of Madness isn't nearly as creepy as some of his other films, but it is, by far, the craziest yet.

It also has one of the best disclaimers ever: "Human interaction was monitored by the Inter Planetary Psychiatric Association. The body count was high, the casualties are heavy." 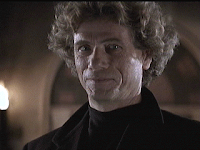