The Most Holiest of Nights

In 1963 Michael Meyers killed his sister on Halloween. He was promptly locked away in a psychiatric hospital were he's been studied by Dr. Loomis. Dr. Loomis spends 8 years trying to get to know Michael, and then seven more trying to keep him locked up. On the night of October 30th, 1978, a 23 year-0ld Michael escapes and returns to his home town of Haddonfield. While at home, he spies Lori Strode and marks her for death. And so what had promised to be an extremely boring Halloween for Lori turns out to be the worst night of her life.

What does Shatner wear on Halloween?
I first saw this movie a long time ago, and saw it once more after that. I'll admit to having forgotten some of the details, so when I watched Halloween again for the purposes of this project (and perfectly timed, I might add) I had a hard time trying to separate out Carpenter's possible craziness from my own. Simply put, I got scared. Halloween is, at times, really creepy.

The film suffers from the same odd pacing first experienced in Assault on Precinct 13. I'm talking about the prolonged evening and the very sudden change to nighttime, and I believe this is more a factor of weak scripting and shooting as opposed to craziness on the part of John Carpenter. Additionally, the body count is quite low; recall this film helped launch the slasher. Michael Meyers devotes a lot of screen time to stalking and scaring Lori Strode, and again I don't believe this particular story element is representative of a unhinged personality. Rather, Michael Meyers' psychological assault on Lori is quite brilliant. Where later films feature the stalk 'n slash as a perfunctory series of events to repeated again and again until everyone's dead, Halloween draws out the initial and singular stalking of Lori, punctuating it with moments of violence and murder. This not only sets us on edge as we now know what's in store for poor Lori Strode, but Lori too grows anxious as she waits for her mysterious antagonist to finally make his intentions known.

Huh, maybe you would have be a little nuts to come up with that.

Craze-o-meter: 1, nothing I haven't already thought about 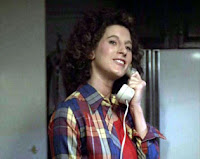