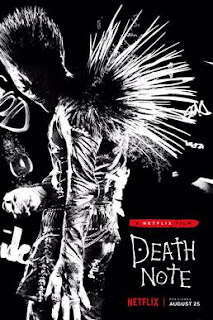 There is absolutely nothing wrong with Death Note. Except for, you know, everything.

Okay, to be fair, the film looks good (for the most part). It's well shot, properly lit, and nicely edited together, but all that style can't make up for the badly-told story that is the substance of Death Note.

I can sum up the film's problems thusly: Montauk is on the east coast.

Montauk, which is where L comes from, is a small community on Long Island. I know this because I spent a few summers there as a kid. It's a beach town, sandy and flat. The Montauk that appears in Death Note is deep in the forest, and the secret institution in which L was "born" is lies in the shadow of a mountain. Death Note was filmed in BC, and although I'm not intimately familiar with the province's geography, I'm pretty sure nowhere in BC could ever be mistaken for Long Island. And still no one thought to change this one minor plot point. The only reason L has to be from the east coast is so that Watari can waste his time traveling across the country (by train!). The clock is ticking, and Watari only has 48 hours to learn L's true name. Death Note is set in Seattle, but what the filmmakers don't understand is that it'll still take a while to get to Oregon or Idaho or the BC interior. Fuck, maybe even West Virginia--the geographic profiles are similar enough. Have any of them ever driven through the mountains? It takes time. But no, the film insists on trying to pass off west for east and this lazy oversight exemplifies why the movie--or more precisely, the story--kinda blows.

Another terribly-conceived moment comes right at the start of the film when Mia is smoking at cheerleader practice. Smoking. Even if her character did smoke (which I don't think she does because she never smokes again after this one scene), she wouldn't smoke during practice. I know I'm talking about unrealistic scenarios in a film about a magical killer book, but Death Note is set in the real world, and in this reality teens don't smoke on school property while practicing their sport.

Death Note starts off relatively strong, with the book quite literally falling out of the sky and into Light's life. He doesn't waste any time making good use of his new power, and movie hurtles along at a breakneck pace. And then everything comes to a screeching halt when L takes over the narrative. All that fun and exciting forward momentum runs up hard against L's investigation into Kira, and what could have been a tense thriller is instead a profanity-leaden PG13 drama.

Any sensible person in Light's situation would try to steer the investigation one way or the other, pitting their intellect against L's. Instead, Light lets himself get baited because this is no longer his story. To make matters worse, I'm not sure the movie itself is even aware that Light is no longer in charge. For the majority of the film's running time, Mia and L wrestle for narrative control, which is a huge problem for us because this film is really supposed to be about the moral ramifications of having power over life and death.

The whole thing comes to a head when Mia tries to strong arm Light into relinquishing the death note. One contrived chase scene later, we have our final showdown between the two teenaged lovers. Wait, what? Yeah, you read that right. The film ends not with Light and L facing off, not even with Light and Ryuk, but with a crazed girl lusting after power and her boyfriend's convoluted plan to undermine her. The film's eleventh hour attempt to give Ryuk some semblance of control over events is laughable at best. At worst, it's final proof that the filmmakers don't understand how to craft a story.

And what's with Light's hair? Either hire a blonde actor or commit to the dye job. Yeesh.
Posted by DM at 10:39