Horror by the Numbers

The summer of 2016 saw a "resurgence" in horror, meaning a handful of studio horror films managed to garner positive reviews from critics. Whenever this happens, the mainstream media reports on mainstream horror like it's surprising or new. The fact of the matter is, horror always makes money (generally speaking), but it is unusual for mainstream horror to perform well both critically and financially.

I took a look at some of the horror releases of 2016 to see if there was anything else worth reporting. 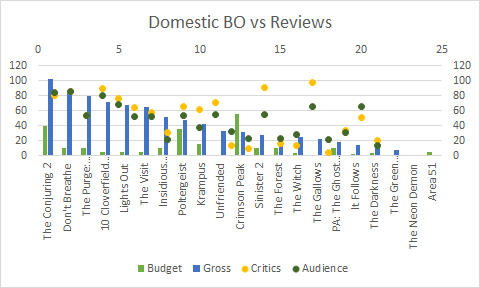 At first glace, we can see that my Y-axes aren't properly formatted. That minor error aside, it's still obvious that horror movies make money. What might surprise some folks is that the smaller-budget films out-perform their more expensive counterparts. And while critics and audiences tend to agree on the films' merit, a movie's budget and box office aren't good indicators of critical reception. Crimson Peak, which cost more money than it earned, wasn't well liked, whereas The Witch completely outdid itself--and had a limited release.

More often than not, a film's budget is not a good indicator of how well it will perform. Crimson Peak, the most expensive film in the sample, did not meet expectations, pulling in $31m--that's a little over half its budget. On the flip side, Unfriended, which was in theatres for the same amount of time, made its budget 32 times over. Having seen both, it is my opinion that Crimson Peak is a better movie than Unfriended, but the latter is more likely to cater to younger audience members, even if most people who saw it don't appear to have liked it very much.

How important are the audience and critical response, and what impact do they have on a film's gross? That's a hard question to answer. As was mentioned above, there appears to be some correlation between reception and box office (better-reviewed films earn more money), but The Gallows, which wasn't well liked by critics or audience members, was still a financial success.

Movies with a longer theatrical run have the potential to rake in a higher gross than films with a short run or a limited release, but The Conjuring 2, The Visit, and Poltergeist, all of which were in theatres for 77 days, performed very differently. The Conjuring 2 earned 2.5 times more than its budget, The Visit a whopping 13 times more, and Poltergeist only made an embarrassing 1.3. Looking at the films' reviews, we see that Poltergeist--which performed the worst of the three--also had the lowest ratings at 31 and 22 from critics and audience members respectively, whereas The Conjuring 2, which didn't have the highest turn-around on its budget, had the highest ratings, scoring in the 80s. 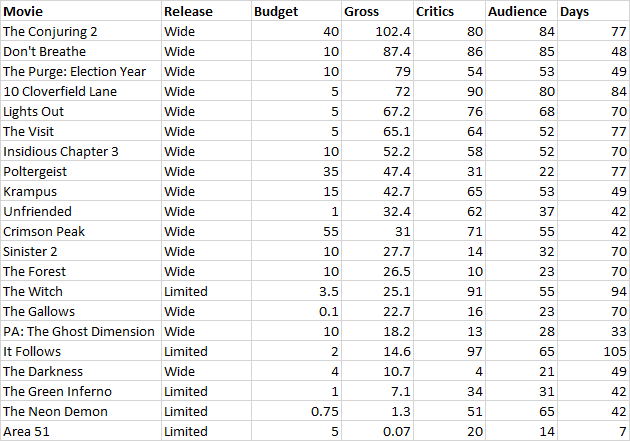 Budget is in millions of dollars, US. Gross is domestic only. Critic and audience ratings are out of 100.
Data collected from The Numbers.

So what does it all mean? Disregarding the fact that we don't know how much of each film's budget is allocated to marketing and promotion, which will influence audience turn out, predicting which movies will and won't succeed is kind of impossible. It Follows came out of nowhere, cost very little to make, and did very well for itself, whereas both The Green Inferno and The Neon Demon were trading on the past successes of their makers (Eli Roth and Nicolas Winding Refn), neither movie appears to have lived up to expectations.

Looking at the top five movies from the summer, two were sequels, one was a sort-of sequel, and two were stand alone films. Sequels and remakes can always be counted on to do relatively well, and The Purge: Election Year, which suffered middling reviews, proves this point. The successes of Don't Breathe and Lights Out suggest that low-concept horror is more likely to appeal to a wider audience. Also of note is the absence of zombie movies, which might mean filmmakers and audiences alike are finally moving on from zombies*.

Horror's mainstream popularity ebbs and flows, and there's no real way to guess when the genre will see an uptick in mainstream media coverage. But when our preferred media outlets do turn their attention to horror, they would do well to dig just a little bit deeper to uncover how weird the genre truly is.

*Train to Busan is a notable exception. Everyone who's seen it loves it, me included.
Posted by DM at 13:20