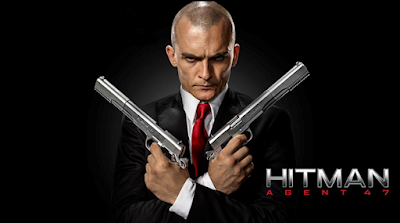 Some of the thoughts that flitted through my brain while watching Hitman: Agent 47:

Ha! This prologue makes no sense. "Man can only wage war. So we built super assassins." For what purpose? To stop war or to be the best at it?

Wait, I thought the Agents worked for the Syndicate.

I guess they're free agents? And Diana is Agent 47's agent?

Who puts out these contracts?

Zachary Quinto is the good guy.

Zachary Quinto is the bad guy.

This movie has structure problems.

Biogenetics. Not to be confused with non-biological genetics.

Where have I seen Dominic Friend before? This is driving me nuts.

Omigod, is everyone in this movie a hitman?

You know, the whole "you're locked in here with me" thing loses its punch when it's repeated back and forth like that.

Now Diana's talking to someone else? Is she also a free agent? A freelance free Agent agent?

You know what this movie needs? A training montage.

If all the hitmen are so smart, how come no one's been able to figure out where this dude is? They can track a woman through CCTV based on her earlobe, but they can't find an old white man in Singapore?

Holy crap, I hope that garden is a real place is real because I need to go there.

I don't really see the point of having a video phone in your desk. That's got to be the least flattering angle there is.

Where the hell is the other Agent? I'm sitting here, waiting for the mysterious other hitman to show up and he refuses to appear. Did the movie forget about him? I feel like the movie forgot about him. I really hope it's Timothy Olyphant.

Oh, don't give me that "you are what you do" bullshit. What he does is kill people. Ergo, he's a hitman.

I'm mildly impressed by this fight.

I'm less impressed by this denouement. Who called in this hit, exactly?

And who the fuck is that??

Two servos can be connected to produce a synchro — a system that precisely matches one servo’s motion to a different. Machinists might measure the output of these synchros to a high stage of accuracy and inform further motion of the synchros to create a closed-loop management system. The first milling machines have been primarily based on the follow of rotary submitting. The automotive industry frequently Baby Lounger Pillows enjoys utilization of} CNC machining for each prototyping and manufacturing. Extruded metallic can be machined into cylinder blocks, gearboxes, valves, axles, and varied other parts. On the opposite hand, CNC machined plastics discover utilization in dashboard panels and gas gauges.The creation of assorted alternative parts additionally be|can be} potential with CNC machining.