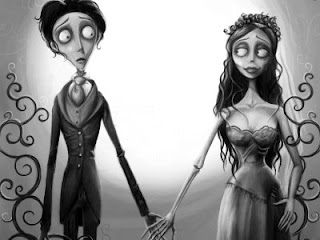 Tonight is the first night of Hannukah, and in addition to eating laktes and donuts, I'm celebrating by sharing with you some supernatural tidbits from Jewish religion and folklore. It's not often genre creators mine Judiasm for inspiration--the buck stops at golems and dybbuks--but the truth is Jewish culture is full of demons and monsters. With that in mind, I've prepared, for this festival of lights, eight posts that celebrate Judaism's "dark" side.

Tim Burton's delightful movie about a man who marries a corpse is based on a Jewish folktale which tells a similar story. In The Finger (retold by Howard Schwartz in Lilith's Cave: Jewish Tales of the Supernatural), a man places his wedding band on what looks like a finger sticking out of the ground. The following day, the corpse arrives a the man's real wedding ceremony. To his horror, the man learns that he is, in fact, married to the corpse, and she wants to consummate it.

The story is a 16th century tale, part of the Shivhei ha-Ari, a cycle of stories about Rabbi Luria who battled with the supernatural. And The Finger isn't the only story in which a man is married to something "other." In The Demon in the Tree, a boy unwittingly marries a demon who kills all of his wives until one of them comes up with a solution to the demon-bride problem.

Jewish folklore, like that found elsewhere throughout history and around the world, is full of tales of the supernatural. Some are cautionary, others touch on stresses in daily life, and all rely on a healthy dose of faith and superstition to bring about order in a chaotic world. Unsurprisingly, some Jewish folklore has been influenced by the cultures and traditions of their neighbours, but the stories were altered to reflect Jewish beliefs and sensibilities.

Related to these stories about marrying corpses and demons, is the belief that demons live in dark places. The corpse was buried in the ground--but too close to the surface, so that her finger was mistaken for a branch. And the demon-bride was found hiding in a tree. Light can help keep demons away, which might go some way in explaining a Jewish wedding tradition in which candles are carried during the processional. The light of the wedding candles will keep away jealous demons and spirits.

You can read The Finger and The Demon in the Tree here.
Posted by DM at 18:13