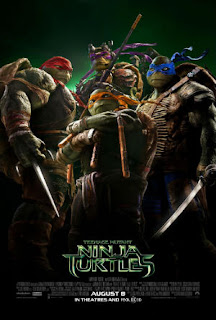 Well, I finally saw it. I didn't want to, but I felt obligated to do so. And I have to say it wasn't nearly as bad as I expected. Of course, the bar so low as to be underground, but still I've seen worse. That doesn't mean the movie is any good--it's terrible--but it's not the worse thing ever.

I think there's some comfort to be found there.

Platinum Dunes's TMNT was doomed from the start; there was simply no way Michael Bay could make a new Ninja Turtles movie and not face a staggering amount of opposition. He'd already destroyed Transformers and now his company was taking aim at everyone's next favourite childhood property. Bay added insult to injury when he announced the turtles would be aliens. Aliens? Like this is some Biker Mice from Mars bullshit? But despite massive blowback and vitriol, PD made and released TMNT, disappointing fans and critics alike. 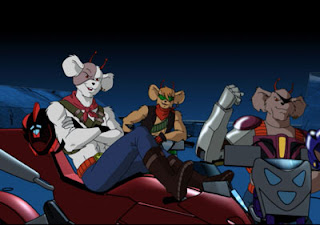 At least they changed the part about them being aliens. There's even a line in the script about it. "Are they aliens?" Vernon asks. "No, that's stupid," says April. Of course it's stupid. They're mutants. It's right there in the title. We don't need a clever line to remind us all about how gracious PD was to bow to "popular opinion" and rewrite that part of the origin story.

But rewrite it they did. This time round the turtles are the mutated results of trying to reverse-engineer an antidote for a poisonous gas. Why a lab would use turtles as test subjects is never questioned in the film, so I won't bring it up here. What I will bring up is the poisonous gas. In a minute. Bear with me.

So. Eric Sacks owns a big medical company that had a tragic lab fire that killed April's father many years ago. Turns out her dad set fire to the lab when he found out what Sacks was up to, namely trying to create a cure for some horrible disease he was planning to unleash on the city.

After the lab fire, Sacks thought all was lost and the Big Plan to Poison New York was mothballed. Then in walks April O'Neill who tells him all about how her pet turtles, which where the lab turtles, grew up big and strong and are, wait for it, the mysterious vigilantes who've been thwarting the Foot Clan attacks around the city. This is great news for Sacks because he's secretly in league with the Foot and their leader, Shredder who is, wait for it, Sacks's surrogate father who raised him when his parents died when they were living in Japan.

And why was Sacks planning to gas New York? So he could sell the cure and become rich. "Stupid rich," in his own words. Because he's not rich enough. Which is a real problem for him.

Did you get all that? Doesn't matter! Moving on.

TMNT is so full of problems it's hard to know where to begin. The easiest thing to do would be to compare it to the 1990 movie of the same name. 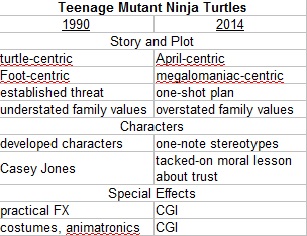 Does my nostalgia for old-school Ninja Turtles cloud my judgement with regards to PD's TMNT? Probably, yeah. But there's a reason I and everyone else like it so much, and despise this incarnation. What the new TMNT lacks is substance, from its bad CGI to its plot. The turtles are well animated, for the most part, but Splinter is so poorly realized he's difficult to watch. That's to say nothing of Shredder, who appears to have gravity-defying superpowers. Shredder fights with grace and ease, as if his enormous suit of armour was made of rice paper instead of chrome.

Make a list of white boy suburban stereotypes and you'll guess at least 50% of the turtles' characters and personalities, maybe 75 if you include "nerd." Only Leonardo fails the stereotype test but that's because he as no personality whatsoever. The bare minimum of effort was made to give these characters a life of their own, independent of one another: Raf butts heads with Leo because he's expected to; Mikey pervs on April because someone (wrongly) thought it'd be funny; and Donny's contribution to the team dynamic is his technological know-how, he does't say or do anything that isn't related to tech.

This dismissive attitude regarding the turtles' characters is explained by the fact that the movie isn't really about them. For whatever reason, TMNT is April's story. She's the central figure in all this, the fixed point around which Sacks and the turtles orbit. The movie breaks away from April only when the action plot demands it, like for expositions or a fight. Otherwise, TMNT is the April O'Neill Power Hour with Special Guests the Ninja Turtles. 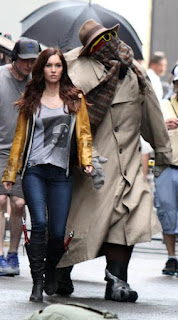 Or, Memoirs of an Invisible Turtle?

If you're wondering how Shredder and the Foot Clan factor into all of this, you're not alone. I've seen the movie and I'm still not sure. The Foot fall somewhere on the spectrum between "street gang" and "crime syndicate." Shredder's pissed the Foot aren't getting the attention or respect he thinks they deserve, lamenting the fact that most people in the city think they're a myth. For the life of me, I can't understand why this would bother him. If anything, Shredder should be pleased no one takes the Foot Clan seriously--it's so much easier to carry out your nefarious deeds on the dl when nobody thinks you're a threat. What Shredder's big-picture plans are for the Foot, I have no clue. And it doesn't matter. The Foot Clan are in the movie because of course they are.

As a kid, I didn't tune in to Ninja Turtles for an important lesson about family or trust or some other crap. I watched the cartoon and the movies because they were fun. If, along the way, I learned something about teamwork or self-confidence, so much the better. TMNT seems to have missed the subtle point here, that the moralizing that takes place in kids' entertainment is woven into the story. In PD's version, any valuable lessons learned are undercut by the sheer awkwardness of the "teachable moment." Raf spews forth a desperate confession about why he fronts so much that, while heartfelt, will likely engender more ridicule than compassion. And Splinter offers up some garbage about how the turtle's greatest strength is their teamwork. That would have been a great lesson, sure, if their ability to work together (or not) was ever an issue.

The problem is the movie's all incident. There's no story development here, just a series of action sequences all piled on top of one another. And sometimes, that's all you want from a movie. But not this movie. TMNT wants desperately to tell us a story and to have it mean something, but it doesn't know how. Substance has been replaced by special effects, and the kids who see this movie will grow up never knowing the difference.
Posted by DM at 17:32

so the turtles grew up with April? how'd they learn to be Ninjas? was Splinter also a pet?

Well, no. She cared for all of them when they were lab animals, and then dumped them in the sewer the night of the big lab fire. Splinter taught them ninjitsu, which he learned from a book.

This is one reason I hate retconning.