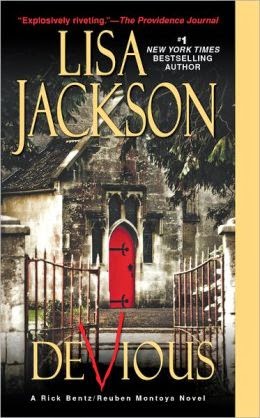 This is the first Lisa Jackson book I've read, and it will likely be my last. In short, I hated it. At least twice I considered leaving it unfinished. Why did I continue to read a book I couldn't stand? I don't know. I think part of me hoped it might improve while another, more masochistic part, was curious to see how much worse it could get.

I both was and wasn't disappointed--Devious was so much worse than I imagined. Also, and this is the kicker, I traded a book I really liked for this stinker.

Valerie Renard is a former police detective living in New Orleans. On the eve of her divorce, her sister is murdered. The following morning, her soon-to-be ex-husband arrives at her door. These two events are unrelated. Slade is not a suspect in Camille's murder, but his presence is a blessing and curse for Val who's determined to find her sister's killer and divorce her husband.

Camille's murder, it turns out, is the first in a series of killings made all the more sensational by the fact that most of the victims are nuns. As Valerie digs deeper into Camille's life, she comes to learn new and interesting things about her sister. And about Slade. No longer so certain about the path she's chosen, Val's life becomes even more complicated when the killer targets her.

The book's cover identifies Devious as being "a Rick Bentz/Reuben Montoya novel." Jackson has written a series of novels about the pair, two homicide detectives with the NOPD. Past adventures are referred to heavily in the text, and not as a nod to die-hard fans of the series, but with the self-conscious attitude of promotion. One problem, though: Bentz and Montoya are background players in this story. They do a minimal amount of detectiving while other characters take up most of the story.

What little police work does take place seems sloppy and half-hearted. It's hard to say whether this is because Devious is really Val's story or because Jackson isn't very good at writing procedural. I'm inclined to go with the latter because despite Val being a former police detective herself, she's not very good at solving mysteries.

But then, Jackson's not very good at writing them. Take for instance Camille's cell phone. The phone is mailed to the police and then disappears from the story. A second phone turns up in Val's house and it, too, leaves the narrative once it's collected by the cops. Was it the same phone? Did Jackson loose track of evidence? The answers don't matter because, in the end, the phone doesn't matter. It's a meaningless plot point. Then there's the curious signature left by the killer, a pattern of blood drops on the victims' clothes. What does it mean? We never find out. And what about the disappearing wedding dresses? Or the possibility of a copycat emulating the ritual of a killer last seen ten years ago?

And there's Detective Montoya who singles out one suspect, to the exclusion of all others, without any solid evidence. His tunnel vision prevents both him and his partner from investigating all possible angles.

Jackson introduces too many plot points, following up on too few. Some revelations come much too late in the story to be properly developed, while others have no pay-off. Why bother harping on Sister Lucia's ESP if it serves no purpose other than to traumatize the poor woman? And what's the point of a coded message in a secret diary if we're not being led down a new path of inquiry and intrigue that will ultimately lead to the killer?

Devious has all the makings of a scandalous and sensational murder mystery/thriller but Jackson has no idea how to fit the pieces together into a well-paced and satisfying story. The book begins with the murder of a nun and then stops dead as people faff about and the author repeats herself in character descriptions and backstories. A badly handled misdirection results in near-total confusion at the end when the killer is revealed.

The book holds no suspense. The killer's identity is a complete surprise--there is perhaps one clue that suggests who the killer might be but this is only mentioned in passing and is then dismissed. Characters continually get in each other's way, preventing the story from moving forward, and the author holds back important information that turns out to have tremendous consequences for everyone.

I can't remember a book I've read in recent years that had as many problems, was as badly written, and was as dissatisfying as Devious. Perhaps the only good thing that I can take away from it is a lowered standard for publishing which I feel confident I can surpass when I finally get around to finishing my own masterwork of literary fiction.
Posted by DM at 21:16


I really like this review. but http://essaycorrector.org/blog better to write in their corrections I redid the work and got A +