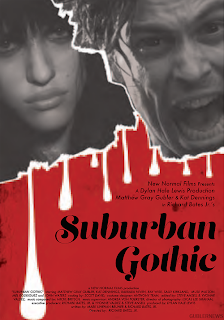 I wanted so much to like this movie. I'd even pre-selected it as a top five pick. But as is sometimes the case, expectations far exceed reality. Normally, when I'm really looking forward to a movie, I lower the bar but not this time.

Raymond is forced to move home after graduating business school. There, the suffers and endless torrent of criticism from his racist father and nightmares. Years ago, Raymond used to think he saw ghosts, that his house was haunted. Now he's seeing them again and is slowly beginning to realize that his childhood fantasies were in fact reality. His house is haunted and he's got to find out why.

Suburban Gothic has the making of a fun and funny ghost story, but its main haunted house plot is too often sidelined by Raymond's adjustment to and frustration with having to move back in with is parents. Not enough screen time is devoted to the haunting which means the ghost story itself isn't as fully developed as it could be.

As is the case with a number of the movies that screened at Toronto After Dark, Suburban Gothic was meant to be an homage of sorts to director Richard Bates Jr.'s favourite childhood films. As he explained, he suffered a bout of depression after making Excision because he couldn't get any work. People liked his movie, but were wary of having him at the helm, worried he might turn out something that couldn't be marketed to a wider (and younger) audience. So he turned to the movies he loved as a kid to help alleviate some of his unhappiness. This indulgence led to what became Suburban Gothic, and you can see it in the story on screen.

Problem is, you don't see enough of it. Raymonds's personal problems overshadow the ghost story. Moreover, a significant story development that has a huge impact on Raymond's life and is specific to the haunting is treated as a minor setback. As much as I appreciate what the movie means for Bates Jr., there's simply too much of his own personal feelings of frustration and resentment crammed in—the ghost story, which should be the primary source of conflict in the script takes a back seat to Raymond's dad.

Dad is too aggressively unlikeable to be anything but a caricature. He's not a real person, he's an abstraction of all the bad things Bates Jr. was thinking and feeling at the time of writing. By contrast, Raymond's mom has little to no personality whatsoever, and other characters come and go seemingly at random. The only constant is Becca, a tough, frank, woman who runs a bar. She and Raymond have all the personality in the film split between them, and she's the one who motivates Raymond to hunt the ghost in his house.


Despite the overly negative tone of this review, I did have good time with Suburban Gothic. I just didn't have as good a time as I was hoping. Perhaps the film would do better to be marketed not as a ghost story but as a coming-of-second age with ghosts thrown in. Raymond's quarter-life crisis is something a lot of young people today can probably sympathize with—that realization that all the pieces won't just fall into place upon graduation. Personally, I can relate to that. As for unmet expectations, I'd be happier if I didn't have to deal with those on a regular basis, either in life or at the movies.
Posted by DM at 09:50