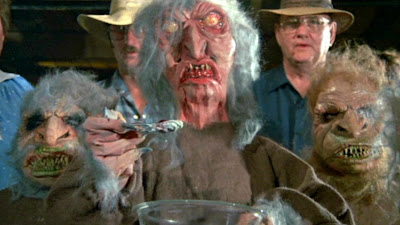 In Paracinema 19, I wrote an article titled “Firing Broadsides: Creating a Horror Canon,” in which I examine the issues surrounding canon-building. When I first proposed a piece on horror canon I thought it would be a fun time researching classic horror titles. I had no idea what I was getting into. Typing “horror canon” into Google didn't return much, and though Google Scholar yielded better results, I soon came to understand that I was getting involved in something much bigger and more complex than a simple list of movies. Canon was just the beginning.

Researching horror canon led me deep into genre history and development. As I learned, canon-building is a lesson in genre: how it grows and develops over time, and how it's studied and analyized. Through my readings, I learned that canon-building can be a divisive topic as the politics of inclusion and exclusion are applied during the process of canon formation. Why this film instead of that one? Why not this other film also? Thornier still is the issue of what's genre and what's not. I recall one author who, when asked the question, “Is it horror or is it thriller?” answered, “That depends on whether you like horror movies.” I'm not here to debate the issue of horror vs thriller, but I have a new appreciation for the difficulties involved in that kind of genre analysis.

What I am here to do is propose a horror canon. Ask any group of horror fans what's canon and no doubt they will each of them draw up similar lists. This would be the “unofficial” horror canon, an agreed-upon list of movies that are, for whatever reasons, important to the genre; classic films, great or award-winning films, cult films—all enjoy canon status within the hearts and minds of the horror-loving public. But what about an “official” canon, the authoritative list of horror movies that must be seen and studied for a proper education in genre film?

To read the rest of this post, please visit Paracinema. I invite you to leave your comments on either site with your thoughts and recommendations about which movies should be considered for an "official" horror canon.
Posted by DM at 15:46

I see a serious problem - old guys like me. The age of exposure to films creates a world view of them. Somehow I doubt that any pre-sound films, other than Nosferatu maybe, would make your list. Same goes for Universal's films of the '30's and '40's. On the other hand pretty much all slasher films other than Halloween, Friday the 13th and Nightmare on Elm Street wouldn't be on mine.

Here has so alternative posting about. I like this article for the importance of it as I want to share AAA Miracle Furnace and Vancouver Carpet Cleaning is the leader of customer service and leader of the cleaning industry for Vancouver, BC Metro. Our Expert carpet cleaning and furnace cleaning services are offered to residential and commercial. We set the standard in customer service. We are voted the highest of carpet cleaning Vancouver