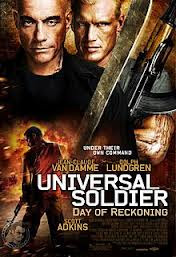 Here's some truth: I have never seen a Universal Soldier movie. But that didn't stop me from enjoying this latest installment in the Unisol franchise.

John remembers his familly and the face of the man that killed them. And that's it. When he wakes up in hospital, all he has is a strong desire for vengeance--a driving need to find the man who murdered his wife and daughter. John's vengeance quest leads him down a dark road lined with mystery. Pursued by Magnus, a Unisol, and haunted by memories of happier times, John kicks and punches his way to truth and revenge.

I have it on good authority that Day of Reckoning breaks away from the recent trend of Unisol movies, taking itself and its subject matter seriously. The film opens with child murder, features no less three brutal fight scenes, and any number of people are shotgunned to death. The film pulls no punches and makes no apologies for its violence.

To read the rest of this review, please visit Paracinema.
Posted by DM at 20:18

Don't worry, your state of mind probably depends on you never having seen the prior movies before! haha! After the awesome original, there's two dire unofficial sequels, then there's what's basically a remake, then there's a film that promises JCVD and Dolph Lundgren kicking ass...and Dolph has less that ten minutes onscreen, and JCVD doesn't have much more than that!

Was it ever explained why JCVD's character was a bad guy all of a sudden?

I think he came full circle--from oppressee to oppressor. And there's that Apocalypse Now stuff, like he's Kurtz gone native.

I feel like I should, at some point, see the original film, but I'm gonna give the others a miss.

do they look as amazingly frankenstiened in the movie as they do on the poster/dvd cover?

^ Not hardly. Just kind of old, although JCVD wears some strange makeup in his big scene.

Just watched this last night, and I loved it. It's strange because sequels, especially for a franchise such as this, should get worse with each one. This series bucks that trend with the past two being all kinds of awesome. They morphed the franchise into that of horror-action, and I'm hooked and ready for more!

I'm glad you liked it, Markus!