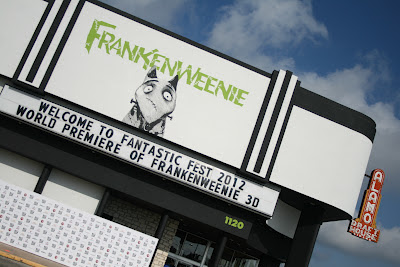 The chatter around the theatre after the film's world premier at Fantastic Fest was that Tim Burton should to stick to animation; it's where he started and where he should return. The statement accurately reflects Burton's recent lackluster box office performance, but completely disregards his earlier successes. Ironically, Frankenweenie itself calls attention to Burton's earlier work, reveling in genre nostalgia.

Victor and his dog Sparky are best friends, but an unfortunate accident leaves Victor in mourning. After a particularly electrifying science lesson, Victor gets the idea to resurrect his dog, and the experiment is a huge success. Victor is less successful in keeping a lid on his newly undead pet. Soon enough Victor's classmates are all racing to bring their departed animal friends back to life in time for the science fair.

In classic Burton style, things go wildly out of control as everyone gets caught up in the excitement of pseudoscientific experimentation, and the film balances precariously on the edge of sanity. But the story manages to reign itself in just in time for a thrilling, emotional end.

To read the rest of this review, please visit Paracinema.
Posted by DM at 01:20

I think this movie looks funny and will be a good one to take the whole family to.