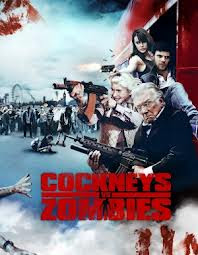 Personally, I’m not always a huge fan of zombie movies. I find most of them to be predictable, derivative crap.

Zombie movies aren’t really about zombies anyway. The films are more about the characters, their relationships and conflicts, than the zombies. It might help to think of the zombie in terms of a plot device rather than an antagonist or villain. Moreover, zombies serve largely as an allegory or metaphor for political and cultural climates. Or they should, at any rate. Cockneys vs Zombies understands the character and situational aspects of the zombie film better than most, but I’m still working out the finer details of its social commentary.

A chance discovery at a London construction site unleashes a zompocalypse on the east end on the very same day brothers Andy and Terry rob a bank. The robbery goes better than expected, but the zombie outbreak causes severe problems for phase two of the plan. Meanwhile, Andy and Terry’s grandfather is trapped inside his old folks home with a handful of survivors. Andy and Terry and their crew must negotiate the zombie-infested landscape to rescue their grandad.

To read the rest of this review, please visit Paracinema.

"understands it finer than most" ... not exactly a very high bar. :)