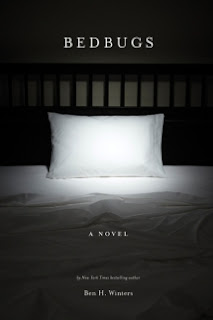 I had bedbugs.  I thought it was allergies.  I was all itchy around my wrists and ankles.  I was lucky they didn't migrate from the mattress, but was stupid to not figure it out sooner.

In Bedbugs by Ben H. Winters, Susan Wendt is painfully aware of her bedbug problem, but is much less fortunate that I was.

The Wendt's new apartment is nearly perfect but shortly after moving in, Susan begins to experience some things she can't explain: there's a faint pinging sound coming from nowhere in particular, and she finds a small photo of the previous tenants, caked in blood.  The building has a dark history.  The owner's husband killed himself in the basement, and the last tenants disappeared without a trace.  Susan is willing to accept that her family's new home is a little strange, as long as there are no bedbugs.

But there are bedbugs.  Lots of them.  And they're after Susan.

Bedbugs blends urban paranoia with deep-seated psychosis.  Bedbugs are a real problem in some cities, and Winters uses the threat of bedbugs to explore Susan's fragile psyche.  Susan left her job at Legal Aid to return to painting and take care of her young daughter.  Susan's husband, Alex, runs his own commercial photography business and enjoys a limited amount of success.  In her darker moments, Susan believes Alex is resentful of her, but that is her own resentment reflecting back on herself.  Since quitting her job, Susan hasn't once tried to paint, and her subconscious feeling of unfulfillment manifests as a slight persecution complex.

When the bedbugs first appear to Susan, she has trouble convincing Alex they might have a problem.  But they bring in an exterminator anyway.  The place is clean.  There are no bugs.  But Susan keeps getting bit, and she develops a kind of fanaticism, retreating into the online world of bedbug websites.  Finding solace in the forums, Susan is just barely able to manage her paranoia, but outwardly she's exhibiting some alarming signs of a growing insanity.  The woman has been scratching herself raw.

Bedbugs uses a slow burn to help the reader better appreciate Susan's descent into madness.  When the story reaches its climax, the line between fantasy and reality has become so blurred, you're uncertain about who's really crazy.  But all is made clear in the end, as Bedbgus reveals its true nature.

Winters is the best-selling author of Sense and Sensibility and Sea Monsters.  With Bedbugs, he steps out of the past and into the present to prey on contemporary fears.  Unseen by most people, bedbugs feed on human blood, and dealing with an infestation can be financially and emotionally draining.  Bedbugs can be a real horror show, and Winters has taken it a step further because his insects feed not only on the body, but also the soul.

Bedbugs is infesting booksellers beginning September 6, 2011.
Posted by DM at 10:11

Sounds like a good read DM I think I need to pick this one up. As always great review :)